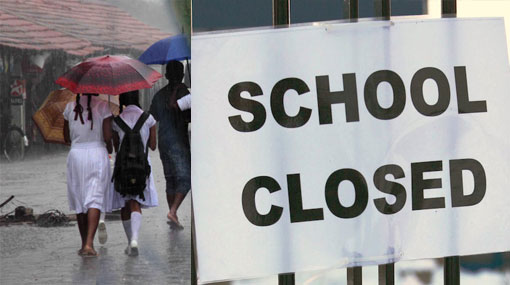 The Governor of the Eastern Province Anuradha Yahampath has instructed provincial education officials to close all schools in the province from tomorrow (02) until Friday (04), due to the adverse weather forecast.

The Department of Meteorology has issued a ‘Red’ warning stating that the low-pressure area in the south-east Bay of Bengal is likely to intensify further into a cyclonic storm and cross Eastern coast of Sri Lanka.

Therefore, the Eastern Governor has taken this decision to close all schools as the adverse weather could have an impact on the people in the province and in the event the schools would have to be used as displacement camps for the people affected.

The Met. Department today said that the low-pressure area has concentrated into a depression lay centered 500 km southeast to Trincomalee at 11.30 am today (01).

This system is very likely to move west-northwestwards and cross the Eastern coast of Sri Lanka between Batticaloa and Point-Pedro around tomorrow (02) evening/night.

Due to this situation, the rainy and windy condition is expected to enhance considerably over the island.