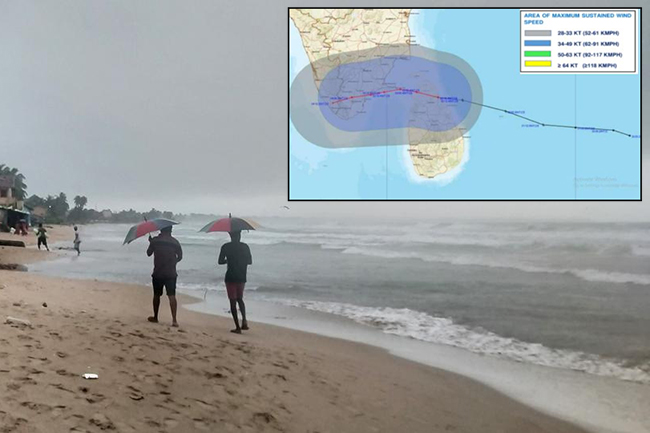 Influence of Cyclone Burevi to gradually reduce today; downpours in North to continue

The centre of the cyclonic storm ‘Burevi’ has crossed north-eastern coast of Sri Lanka between Kuchchaveli and Thiriyayi between 10.30 pm and 11.30 pm yesterday (December 02), says the Department of Meteorology.

This cyclonic storm, with a wind speed of 70-80 kmph gusting up to 90 kmph, is very likely to move west-northwestward, emerge into Gulf of Mannar by noon today. Therefore, the influence of the cyclonic storm is expected to be gradually reduced during the next few hours.

Showers or thundershowers will occur in the Northern, North-western and North-central provinces. Very heavy rainfall above 150 mm can be expected at some places.

Showers will occur at times in the Western and Sabaragamuwa provinces and in Galle and Matara districts.

Intermittent showers or thundershowers will occur in the deep and shallow sea areas extending from   Puttalam to Trincomalee via Mannar and Kankesanturai.

Very heavy showers can be expected some places in the above sea areas and showers will occur at times elsewhere.

Winds will be westerly to south-westerly in the sea areas extending from Colombo to   Trincomalee via Puttalam and Kankesanturai. wind speed will be (60-70) kmph and wind speed can increase up to 80kmph at times over these sea areas.

Winds will be south-easterly or variable in the other sea areas around the island and the wind speed will be (40-50) kmph and can increase up to 60 kmph at times.

There is a possibility that nearshore sea areas off the coast extending from Negombo to   Kankesanturai via Puttalam may experience surges due to the effect of swell waves, having (2.0-3.0) m height.

Naval and fishing communities are advised not to venture into the deep and shallow sea areas off the coast extending from Colombo to Trincomalee via Mannar and Kankesanturai until tomorrow morning.

Fishermen are advised to be vigilant in other sea areas.