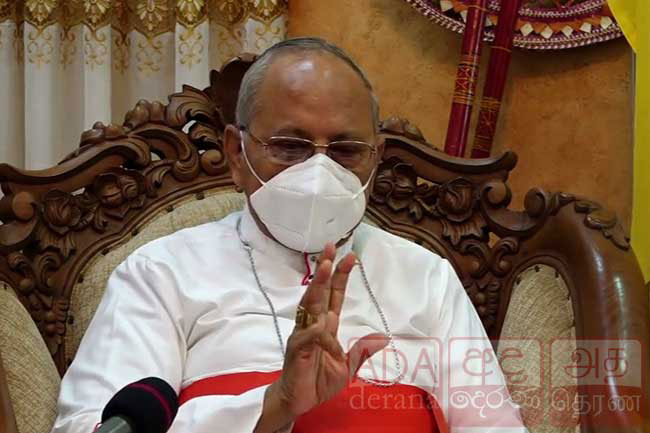 Archbishop of Colombo, His Eminence Malcolm Cardinal Ranjith says if the present government fails to punish those responsible for the Easter attacks, an alternative course of action will have to be sought.

The Cardinal made this statement when Samagi Jana Balawegaya MP Kavinda Jayawardena called on him on Thursday (03).

The Catholic community has been waiting to see when the truth behind the Easter Sunday attacks will finally be revealed, he said.

“Although numerous suspects have been in custody, we are still in the dark whether their facts are being analyzed or not.”

A newspaper report mentioned that the term of the Presidential Commission of Inquiry probing the Easter Sunday terror attacks is supposed to end on the 20th of this month, the Cardinal said further.

It has been very clear to us that the questions during these sessions have only focused on determining the responsibility among political figures and security officials who carried out investigations, he stressed.

“In comparison, it has not focused on the bombers and those who gave them support and funds, therefore, we are in no way satisfied or confident that a proper investigation has been carried out.”

He urged the government not to put the investigation on the back burner under any circumstances.

The security establishment should not fall asleep on the jobs with regard to this incident, the Cardinal noted.

“This must not be swept under the carpet like before, due to political machinations or deals.”

The Cardinal went on to say, “If that happens, then we will have no choice but to seek out an alternative. If our trust in this government is shattered, we will have to depend on someone else to take on this responsibility.”