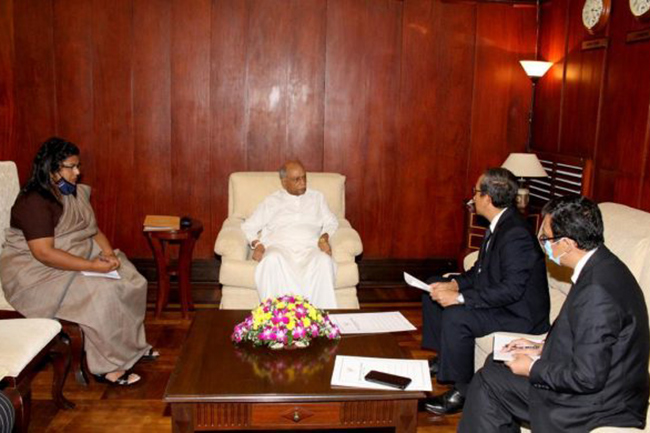 Ambassador of Indonesia in Colombo I. Gusti Ngurah Ardiyasa paid a courtesy call on Foreign Minister Dinesh Gunawardena at the Foreign Ministry on 17 December 2020.  During the discussions, the two dignitaries emphasized the need to further enhance trade ties in a mutually beneficial manner.

While reiterating the long-standing, multifaceted ties between the two countries, Minister Gunawardena appreciated the strong friendship and assistance rendered by Indonesia during the difficult times faced by Sri Lanka in the past.

The Ambassador acknowledged the bonds of friendship and cooperation that exist between the two countries at bilateral, regional and multilateral platforms and expressed hope that the current ties would further expand and deepen into sectors of contemporary importance.

He underscored the need for enhanced cooperation in the areas of illicit trafficking, cooperation against trafficking in narcotic drugs, psychotropic substances and marie and fisheries cooperation and on voluntary international cooperation to present illegal, unregulated and unreported (IUU) fishing which promotes sustainable fisheries governance.

Ambassador Ardiyasa expressed his gratitude towards the Government of Sri Lanka for the assistance rendered towards the repatriation of Indonesian nationals in the recent past, during the height of the outbreak of the COVID-19 pandemic.

Cement was the major import item from Indonesia to Sri Lanka which accounts for 11.05% of total imports from Indonesia in 2019.  In terms of the growing demand pattern in Indonesia and considering the sustainable supply capacities of Sri Lanka, products such as cinnamon, cloves, black tea, tea, rubber tyres can be further expanded in Indonesia.

The Ambassador was accompanied by the First Secretary of the Embassy of Indonesia. The Meeting was attended by officials of the Southeast Asia Division of the Foreign Ministry.