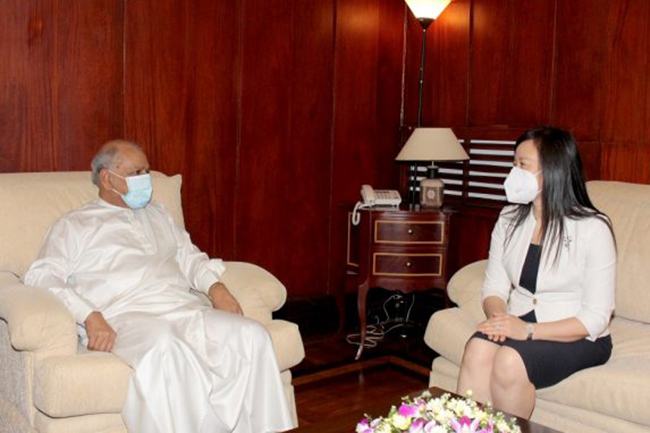 Sri Lanka and Viet Nam have immense potential for cooperation in the agriculture and fisheries sectors, Ambassador of Viet Nam in Colombo, Pham ThiBich Ngoc endorsed during a farewell call on Foreign Minister Dinesh Gunawardena.

The Ambassador added that Vietnam can share their best practices, knowledge and technology transfer, in particular.

Ambassador Pham ThiBich Ngoc further said that such collaboration in the fisheries sector will no doubt contribute in uplifting rural fishing, and fish farming in Batticaloa and Mullaithivu.

Discussing further on agricultural sector cooperation, the Ambassador underscored that there is much potential in coffee, pepper and rubber, where Viet Nam can provide know-how for cultivation. They both agreed that in order to advance trade relations between the two countries, it is important to pursue a Preferential Trade Agreement.

Minister Gunawardena emphasized the importance of strengthening ties in areas of tourism, democracy and education cooperation.

Moreover, the Minister referred to close connections that Sri Lanka had with the great leader of Viet Nam Ho Chi Minh and Madame Nguyen Thi Binh, Foreign Minister of the Revolutionary Government of Vietnam who worked closely with Sri Lanka in the Non-Aligned Movement (NAM).

The Minister highlighted the importance of partnership in amity in international platforms to overcome national security threats.  The Ambassador of Viet Nam expressed their fullest support for Sri Lanka’s bid for Sectoral Dialogue Partnership status in ASEAN.

Sri Lanka and Vietnam celebrated the 50th anniversary of the establishment of diplomatic relations in 2020.  Vietnam and Sri Lanka have enjoyed deep rooted friendly relations for centuries. This relationship is based on cultural and historical similarities and most importantly the common heritage of Buddhism as a strong binding thread between the people of the two countries.

The historical records indicate that Buddhism was introduced to South of Vietnam around the 17th century and it is believed that Sri Lankan priests contributed towards the establishment of Theravada Buddhism in Southern Vietnam.