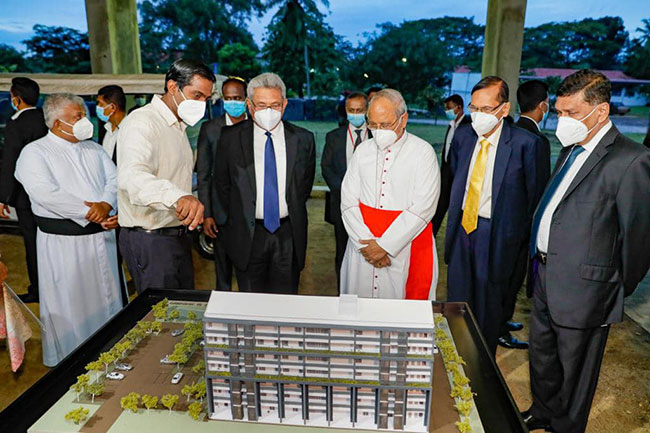 President Gotabaya Rajapaksa says a new education system that will protect the dignity of labour and aimed at creating a skilled society will be introduced in the new normal environment.

A National Education Policy has already been formulated to achieve rapid development as well as to meet expected economic goals in a short period of time, the President further said.

President Rajapaksa made these remarks participating in the official inauguration ceremony of registering the first batch of undergraduate students of Benedict the 16 Catholic Institution of Higher Education (BCI) in Negombo, on Friday (15).

The President emphasized that he expects to give utmost priority to achieve excellence in higher education. He also pointed out the importance of producing more technocrats in the future by converting all universities to ‘smart learning universities’.

The President commended the progress made by the BCI Campus under the guidance of His Eminence, Malcolm Cardinal Ranjith, endowing the future with a generation empowered with technical knowledge, values as well as with a correct vision.

The BCI, a brainchild of His Eminence, Malcolm Cardinal Ranjith, Archbishop of Colombo was established in 2015 in honour of His Holiness Benedict XVI, one of the greatest scholars of the 21st century.  The BCI Institution is located at the Sri Lanka Teacher Training College premises, Minuwangoda Road, Bolawalana. Over 17,200 students have already successfully completed courses in English Language, IT and vocational courses during the past six years.

With the elevation to the level of degree awarding institute recognized by the University Grant Commission, students now have the opportunity to pursue Bachelor of Business Management (BSc. Hons) and Bachelor of Information Technology (BSc.Hons) degree programmes in English Medium.

Prof. Ajantha Dharmasiri delivered the keynote address titled “The Future of Business and Information Technology”. In his address, His Eminence, Malcom Cardinal Ranjith explained the future plans of the BCI Campus.

The President handed over letters of registration to a group of students representing the first batch of undergraduate students.

His Eminence, Malcolm Cardinal Ranjith presented a memento to the President in appreciation of his services towards the establishment of the BCI Campus.

After the ceremony, the President, the Archbishop His Eminence Malcolm Cardinal Ranjith and the Minister of Education planted three sandalwood saplings at the premises.

The delegation headed by the President also made an observational visit to the BCI campus premises which is under construction.