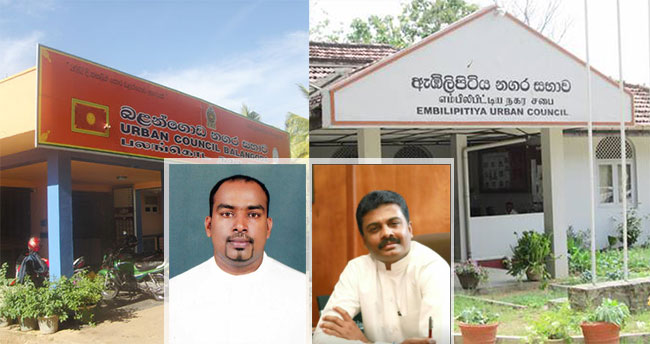 The Governor of the Sabaragamuwa Province Tikiri Kobbekaduwa has removed the Chairmen of the Embilipitiya and Balangoda Urban Councils, pending investigations into allegations against them by a Commission of Inquiry.

The Deputy Chairmen of both Urban Councils, Dinesh Madushanka (Embilipitiya UC) and Thahir Mohamed Rumi (Balangoda UC) have been vested with the authority to execute the duties and powers of the Chairmen.

The relevant Gazette notification on the appointing of the Commission of Inquiry, dismissal of the Chairmen and transfer of powers to Deputy Chairmen, has been issued by the Governor on Friday (15).

Retired High Court Judge Rohana Anura Kumara has been appointed to investigate whether the two Chairmen have committed any wrongdoings under the Urban Councils Ordinance while the Governor has called for a report on the investigations within 03 months.