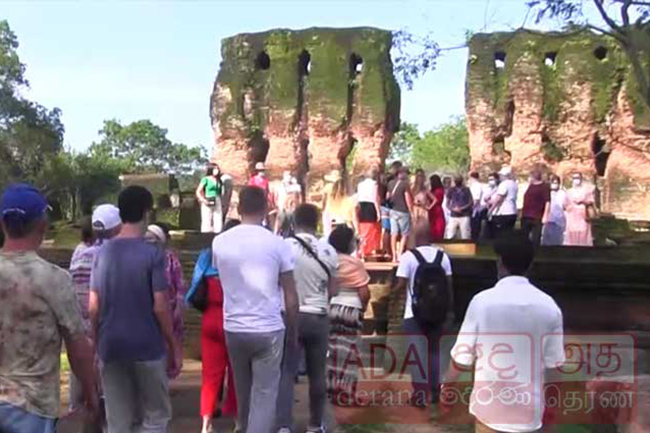 A group of Ukrainian tourists who are currently visiting Sri Lanka have been escorted in a special ‘bio-secure bubble’ to the ancient city of Polonnaruwa today (January 19).

Sri Lanka welcomed the first batch of foreign tourists since the outbreak of Covid-19 pandemic, as a flight specially chartered by SkyUp Airlines touched down at the Mattala International Airport with 180 Ukrainians in late December.

Nearly 1,200 Ukrainian tourists have arrived in the country to date, following the reopening of airports which were closed for commercial flights since March last year due to the Covid-19 pandemic.

According to authorities, Rs 420 million has been netted from this pilot project to bring back tourists to Sri Lanka.

The Tourism Ministry meanwhile announced that Sri Lanka expects to officially reopen its airports for tourists by January 21.

In the meantime, 297 Sri Lankan expatriates, who were stranded in Kuwait due to the Covid-19 pandemic, have returned to the island last night (January 18).

They were brought back as a part of the program to repatriate Sri Lankans living abroad who are unable to return.

The returnees were referred to PCR tests upon arrival at the Bandaranaike International Airport (BIA) in Katunayake and were subsequently moved to quarantine centres operated by Sri Lanka Army.