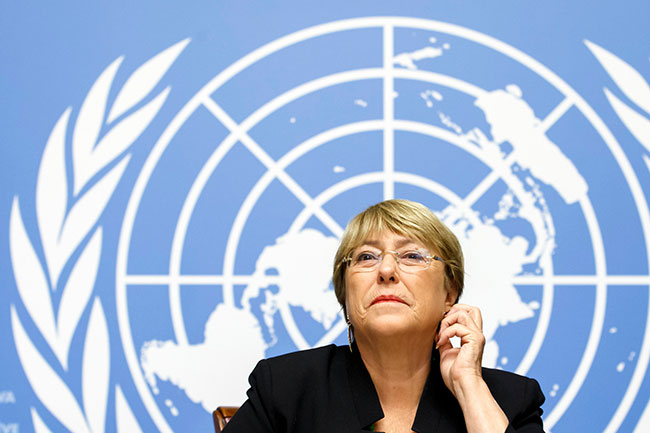 GENEVA: The UN human rights chief has called for an International Criminal Court investigation into Sri Lanka’s Tamil separatist conflict and sanctions on military officials accused of war crimes, according to a report obtained by AFP.

Michelle Bachelet accused Sri Lanka of reneging on promises to ensure justice for thousands of civilians killed in the final stages of the 37-year separatist war that ended a decade ago.

“Domestic initiatives for accountability and reconciliation have repeatedly failed to produce results, more deeply entrenching impunity, and exacerbating victims’ distrust in the system,” she said in the report obtained by AFP ahead of its official release.

The government of President Gotabaya Rajapaksa has reversed some advances made under previous administrations in protecting human rights, the report said.

Surveillance of rights activists and dissidents has increased and a climate of self-censorship has emerged, it claimed.

Sri Lanka has not signed up to the ICC, and so it is outside its jurisdiction. But while another state cannot refer a non-signatory to the ICC, the UN can.

In her latest assessment, Bachelet recommended for the first time that the ICC look into Sri Lanka’s case, and said action should be taken against war criminals, including Tamil rebels, the AFP reported.

“Member states can actively pursue investigation and prosecution of international crimes committed by all parties in Sri Lanka before their own national courts,” she was qouted as saying.

The 17-page report also calls for possible targeted sanctions “such as asset freezes and travel bans against credibly alleged perpetrators” of rights violations.

Silva, who was a field commander at the height of the war, already faces a US travel ban.

He gave a commission of inquiry six months to look into previous inquiries into allegations of “human rights violations, serious violations of international humanitarian law”.

Bachelet called on member states to take action to preserve evidence from key cases such as the killing of 17 aid workers from a French charity in August 2006 and the 2009 assassination of newspaper editor Lasantha Wickrematunge.

She also criticised President Rajapaksa for granting a pardon in 2020 to an army officer convicted and jailed for killing eight Tamil civilians, including four children, in April 2000.