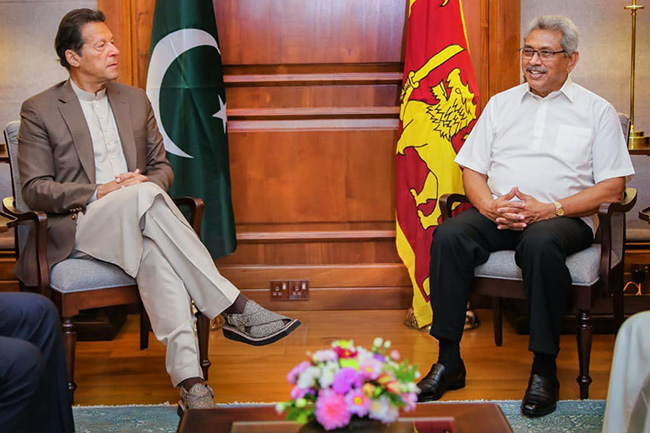 One-on-one bilateral talks between the two leaders began at the Presidential Secretariat this morning (February 24).

PM Imran Khan, who is in Sri Lanka for a two-day official visit, was received by Secretary to President P.B. Jayasundera and Foreign Secretary Admiral Prof. Jayanath Colombage upon his arrival at the Presidential Secretariat.

Further, the two heads of state have looked into ways to exchange technical expertise for promotion of agriculture in Sri Lanka and Pakistan.

They noted that their objective is to boost the agricultural economy in a way that provides higher income for farmers and fair prices for the consumers.

PM Khan observed that the agricultural economy in Pakistan is similar to that of Sri Lanka.

President Rajapaksa has invited the people of Pakistan to visit Sri Lanka with the COVID pandemic subsiding.

He further shared his views on the measures that need to be taken to promote tourism in the two nations.

The two leaders have engaged in a lengthy discussion on improving bilateral relations. Visiting Pakistani PM was of the view that the dialogue was very fruitful.