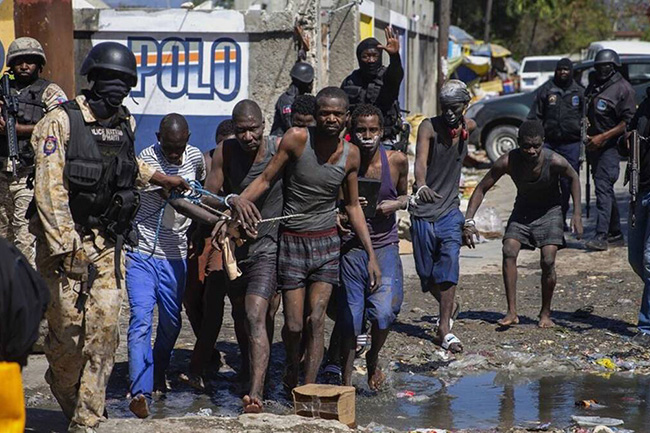 Hundreds of inmates escape from prison in Haitis capital

More than 200 prisoners are on the run in Haiti after escaping from a jail near the capital, Port-au-Prince.

The victims included bystanders who were caught up in the violence, officials said.

One of those who fled, a powerful gang leader named as Arnel Joseph, was killed hours after escaping.

Joseph, still wearing prison ankle cuffs, was a passenger on a motorcycle that was flagged down at a checkpoint, police spokesman Gary Desrosiers said.

The motorcycle failed to stop and Joseph pulled a gun on officers who then shot and fatally wounded him, Mr Desrosiers said.

Joseph was Haiti’s most-wanted gang leader before his arrest in 2019.

Details of the escape are not clear, though it was initially reported that more than 400 inmates had escaped.

Witnesses reported hearing bursts of gunfire at about midday on Thursday and prisoners were then seen running from the prison.

Staff at a nearby clothing store told reporters that they had been forced to give items to the escaped prisoners.

The Croix-des-Bouquets jail was inaugurated in 2012 and was designed for a maximum capacity of 872 inmates, AFP news agency reported.

Frantz Exantus, Haiti’s Communications Secretary, told a news conference on Friday that the jail had held more than 1,500 prisoners before the breakout.

“Twenty-five people died including six prisoners and Divisional Inspector Paul Hector Joseph who was in charge of the prison,” he said.

“Among those killed were some ordinary citizens who were killed by the prisoners during their escape,” he added.

He later added in a tweet that 60 inmates had been captured.

Haiti, which is the poorest country in the Caribbean, has witnessed mass prison escapes before.

In 2019, all 78 inmates of Aquin prison in southern Haiti escaped while police were distracted by anti-government protests nearby.

Two years earlier, more than 170 inmates escaped from a prison in Arcahaie, north of Port-au-Prince.