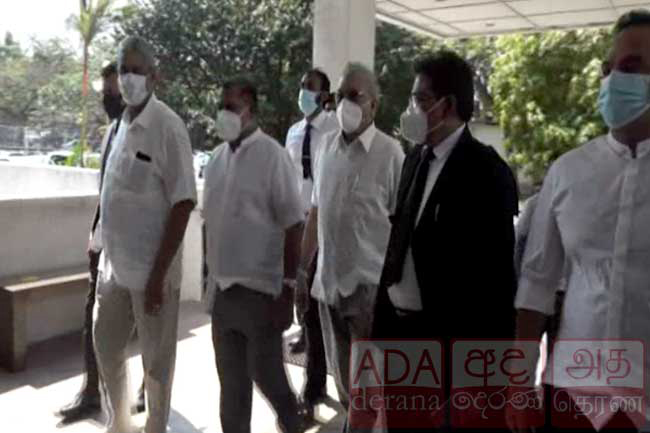 SJB seeks probe against commissioners of PCoI on political victimization

Samagi Jana Balawegaya (SJB) today handed over a petition to the Chief Justice seeking an investigation against the panel of Presidential Commission of Inquiry which probed the alleged incidents of political victimization.

Certain recommendations in the final report of the Presidential Commission have suggested that the Supreme Court has overlooked its jurisdiction, the SJB said in its petition, stressing that this is in contempt of court.

The petition, signed by 40 parliamentarians representing the SJB including Opposition Leader Sajith Premadasa, was submitted to the Supreme Court’s office of the registrar today.

According to them, some of the recommendations in the final report of the Presidential Commission have regarded the powers of the Supreme Court with contempt.

Thereby, the SJB members have called for an investigation against the three commissioners of the panel – Supreme Court Justice (Retired) Upali Abeyratne, Court of Appeal Judge (Retired) Daya Chandrasiri Jayatilake and IGP (Retired) Chandra Fernando – under Article 105(3) of the Constitution.

Further, they have sought an order to remove the names of Upali Abeyratne and Chandrasiri Jayatilake from the list of attorneys of Supreme Court.

The said Presidential Commission was appointed by President Gotabaya Rajapaksa in January last year, to inquire into incidents of political victimizations which have taken place between 8th January 2015 and 16th November 2019.

The commissioners probed political victimizations caused by the activities of the Financial Crimes Investigation Division (FCID), the Bribery Commission and the Police Special Investigation Unit (SIU).