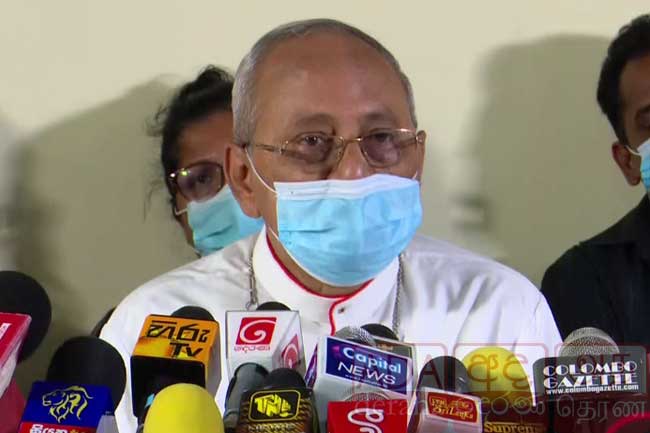 Archbishop of Colombo Malcolm Cardinal Ranjith today called on Sri Lankan authorities to bring to justice without delay the “true masterminds” behind the Easter Sunday attacks and those who have seriously neglected their duties despite having prior knowledge of the attacks.

A copy of the final report of the Presidential Commission of Inquiry (PCoI) appointed to investigate and inquire into the Easter Sunday attacks was handed over to the Archbishop of Colombo, yesterday (01).

Speaking to reporter at a press conference in Colombo today, Cardinal Ranjith expressed his gratitude to the members of the commission for their work over a period of around one-and-a-half years.

He also stated that a team comprising himself, Auxiliary Bishops, reverends and several experts are working on studying the report extensively and present recommendations.

However, the Archbishop pointed out that they have great doubts as to whether the country’s security agencies such as the Criminal Investigation Department (CID), Terrorism Investigation Division (TID) and State Intelligence Service (SIS) had carried out investigations in depth regarding these culpable homicides while the commission was engaged in its duties.

Cardinal Ranjith stated it does not seem like the aforementioned agencies are working on apprehending the “true masterminds” behind the Easter Sunday attacks.

He said that although some actions have been taken it appears though these have been done without much conviction.

“Therefore, we are asking authorities to explain as why they have been unable to investigate the masterminds behind the attacks, those who aided and abetted, those who funded the attackers as well as the individuals who intervened to weaken and sabotage the investigations into them, and to bring them all before justice despite two years passing since the attacks.”

He alleged that they have received information of undue political influence on certain high-ranking officers who investigated the attacks.