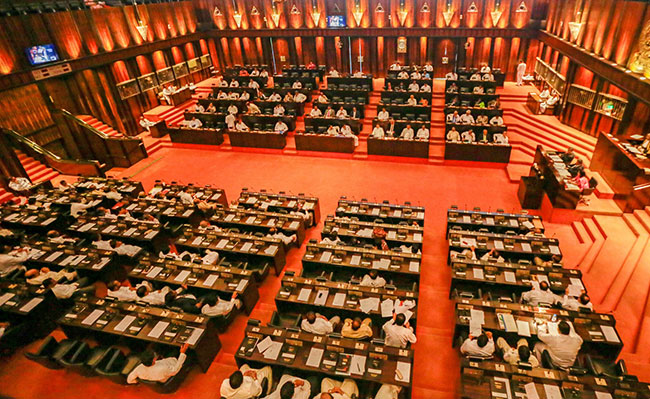 Parliament to debate PCoI report on Easter attacks next week

The report of the Presidential Commission of Inquiry (PCoI) which investigated the Easter Sunday terror attacks will be taken up for debate in Parliament on March 10.

This was decided during the meeting of the Committee on Parliamentary Business chaired by Speaker Mahinda Yapa Abeywardena, which was held today (04).

Accordingly, it was decided that the report of the Presidential Commission of Inquiry would be taken up for debate as an adjournment motion, the Secretary General of Parliament Dhammika Dasanayake said.

The parliamentary session will commence at 10.00 a.m. on Wednesday (March 10) while the first hour has been allocated for the verbal questions of Members of Parliament.

Parliament will not convene on March 12 (Friday), the Secretary General of Parliament stated.

The final report of the Presidential Commission of Inquiry (PCoI) which was appointed to investigate the Easter Sunday terror attacks was tabled in Parliament on February 25.

Leader of the House, Minister Dinesh Gunawardena presented the Sinhala and English versions of the report to the House following the commencement of the parliamentary session.

Accordingly, he requested the Speaker of Parliament Mahinda Yapa Abeywardena to make the report public.

Meanwhile, Chief Opposition Whip Lakshman Kiriella had requested the speaker to hold a 3-day debate on the report while Minister Gunawardena, in response, stated that they had previously agreed for a debate on the report and dates will be scheduled after consulting the Speaker.

He said that the final report of the Presidential Commission of Inquiry will be taken up for the debate after being discussed at the next meeting of the Committee on Parliamentary Business.

The Presidential Commission further recommended a complete ban on Wahabism and Thowheed organizations in Sri Lanka. It also urged a ban on Bodu Bala Sena organization.

Report has suggested a special High Court be set up to hear all criminal cases pertaining to the Easter attacks.

Hearings and other procedures of the Presidential Commission officially came to a conclusion on January 27, 2021 and its final report was handed over to President Gotabaya Rajapaksa on February 01.

The Commission was appointed by former President Maithripala Sirisena on September 22nd, 2019 to investigate the series of attacks that took place on Easter Sunday the same year and to recommend necessary actions.