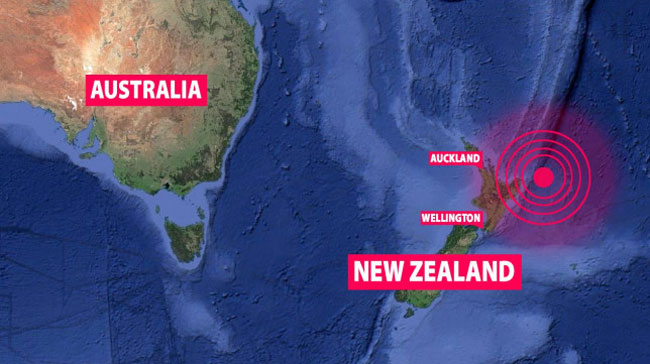 A severe 7.2 magnitude earthquake struck off the east of New Zealand’s North Island on Friday, prompting a tsunami warning, and authorities advised people in some coastal areas to move immediately to high ground.

There were no immediate reports of serious damage or casualties, but the National Emergency Management Agency issued an official tsunami warning.

Tsunami waves were possible within 300 kilometres of the quake’s epicentre, the Pacific Tsunami Warning Centre (PTWC) said, with some flooding expected.

The quake measured a preliminary 6.9 magnitude and was centred at a depth of 10 kilometres about 178 kilometres north-east of Gisborne, the US Geological Survey said.

New Zealand government’s seismic monitor, Geonet, pegged the quake at a magnitude of 7.2 with a depth of 94 kilometres and said it hit at 2.27 am local time (12.27 am AEDT).

More than 60,000 people reported feeling the quake on GeoNet’s website, with 282 people describing the shaking as “severe” and 75 saying it was “extreme”. Most others described it as light.

The closest major city to the epicentre is Gisborne with a population of about 35,500 residents. People near the coast from Cape Runaway to Tolaga Bay were told to evacuate.

TVNZ reported a number of aftershocks, the largest measuring 5.2.

Prime Minister Jacinda Ardern was awake and posting to Facebook.

“Hope everyone is OK out there - especially on the East Coast who would have felt the full force of that earthquake,” she wrote.

The earthquake comes just over a week since the country marked 10 years since a magnitude 6.3 earthquake struck Christchurch, killing 185 people and injured thousands more on February 22, 2011.