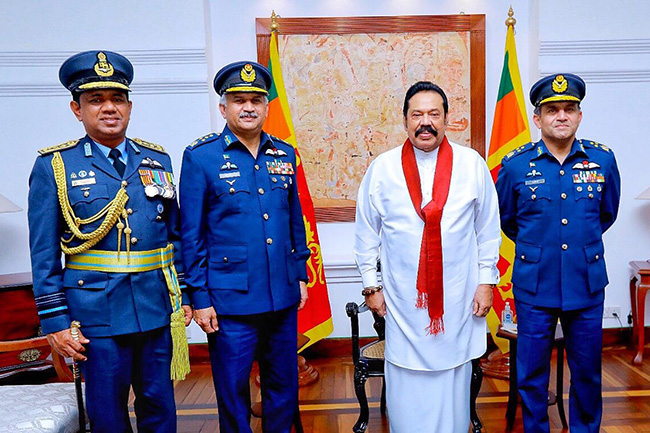 Air Chiefs of Pakistan and Bangladesh call on Prime Minister

Both heads of the Air Force arrived in the country to attend the 70th Anniversary Celebrations of the Sri Lanka Air Force (SLAF), the Prime Minister’s Office said in a statement.

The Pakistani and Bangladeshi delegations spoke to the Prime Minister about providing training for Air Force officers as well as assisting each other with technical requirements that arise.

Air Chief Marshal Khan said that his visit to Sri Lanka shortly after Pakistan Prime Minister Imran Khan’s visit last week “augments, strengthens and enhances the relationship” between the two countries. “We stand by shoulder-to-shoulder [with Sri Lanka],” he said.

Air Chief Marshal Serniabat of Bangladesh spoke about the close ties between the two countries and the two Air Forces. “We stand with our friends,” he said.

The topic of cricket also came up in the conversation with the Pakistan Air Chief Marshal. “We’re very thankful to Sri Lanka for reviving our cricket,” Air Chief Marshal Khan said, noting that when the Sri Lankan team toured Pakistan in December 2019, it helped boost confidence of other teams to play in Pakistan once again.

Sri Lanka Cricket’s 2019 tour of Pakistan was the first international test match Pakistan hosted since the 2009 terrorist attack on the bus carrying the Sri Lankan team.

The two Chiefs of Air Staff have also discussed the COVID-19 situation in their countries, economic revival in the post-COVID era, regional cooperation and tourism, the Prime Minister’s Office said further.