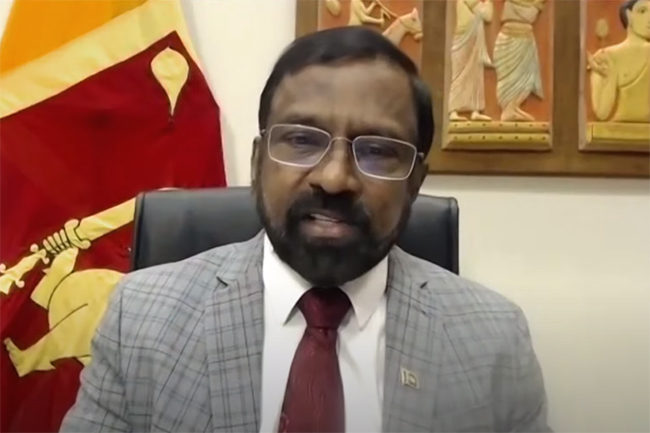 Foreign Secretary Admiral (Rtd) Jayanath Colombage, in a virtual interview with Al Jazeera today (March 06), said Sri Lanka is more interested than any outside parties to keep the country together and to maintain peace, stability and social harmony.

In response to a question raised on the recent report compiled by United Nations High Commissioner for Human Rights Michelle Bachelet, Mr. Colombage dismissed it as “some shadow reporting” and “not bone fide”.

Further, speaking on the government’s move to withdraw from the co-sponsorship of the United National Human Rights Council (UNHRC) resolution 30/1, he said this resolution was considered as the “greatest betrayal of the sovereignty of this country in the modern time”.

He also addressed the concerns raised over retired military officials including himself being appointed to top posts in the government and the apparent expanded militarization of administrative functions.

“There are many countries who are having retired military officers. Just because they served in the military, they should not be prevented from performing a job for their country.”

The military officials serving in government positions include 25 who were appointed as coordinating officers to prevent COVID-19 pandemic in the country, the Foreign Secretary explained. Since the outbreak of COVID-19, Sri Lanka had been using the military in its pandemic response, but many developed countries used the military when things got really bad, he went on to say.

Mr. Colombage also refuted what was termed as ‘military totalitarianism’ under President Gotabaya Rajapaksa, saying, “This is a wrong assumption. On the contrary, what we have seen as people living in this country after 2019 is a very democratic regime. There is no repression or whatsoever.”

He noted that the President came to power with a clear mandate to ensure national security. “Sri Lanka is a country which was devastated by a violent armed conflict for three decades.”

Mr. Colombage pointed out that Sri Lanka managed to win the civil war once national security was given priority. The thrust of the Presidential Commission of Inquiry appointed to investigated the Easter Sunday attacks is that then-government failed to pay attention to national security, and as a result the religious extremists were able to carry out their “dastardly act” targeting churches and hotels on Easter Sunday, he said further.

In response to the questions raised on mandatory cremation of COVID victims and the reversal of the decision following international outcry, the Foreign Secretary said, it was a process based on health and science. He said he has not witnessed stigmatization or marginalization of any community during the government’s COVID response. “Everyone was treated equally.”

The World Health Organization initially said the COVID victims should be cremated, he pointed out, while adding that, “Of course, they later changed it, because the evidence is evolving. This is a pandemic the world has not known before. […] We have to carry out experiments and find the answers.”

Responding to a question raised on what was termed as ‘communal violence’ in the aftermath of Easter attacks, he said it is wrong to say the Muslim community was targeted in Sri Lanka.  “Easter bombing was the single most devastating attacks which has taken place in Sri Lanka.”

He meanwhile insisted that India’s persistence in urging Sri Lanka to uphold the 13th Amendment to the Constitution has nothing to do with the reversal of the East Container Terminal deal.