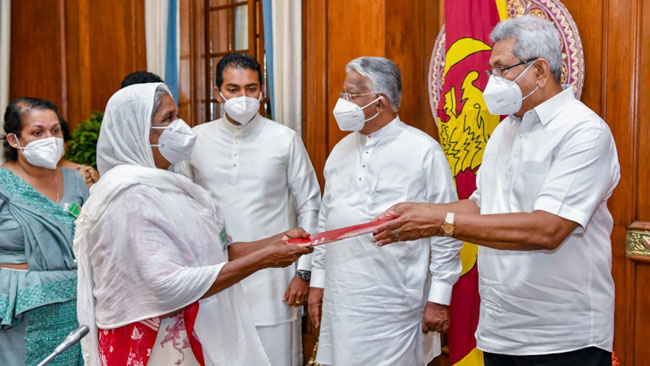 Families who had been in possession of government lands without clear ownership received grants under the patronage of President Gotabaya Rajapaksa today (08) at the Presidential Secretariat.

The government’s objective is to ensure that every family owns land with undisputed ownership as envisioned in the National Policy Framework “Vistas of Prosperity and Splendour”, President Media Division stated.

Under the provisions of the Land Development Ordinance and the State Land Ordinance, grants will be awarded to 20,000 persons based on legal criteria covering the entire island during the first phase of the program.

The program prioritizes low-income families whose livelihood is cultivation. The government intends to empower and encourage them by providing ownership rights to their lands in order to increase their level of income, PMD said.

The grant, awarded by the President, is considered a deed, indicating undisputed ownership of the specific land. The beneficiaries of this grant can obtain a bank loan placing them as collateral.

The President stated that he expects to issue 100,000 ownership grants before the end of this year.

President Rajapaksa presented grants to 19 persons representing all provinces to symbolize the launch of the program today.