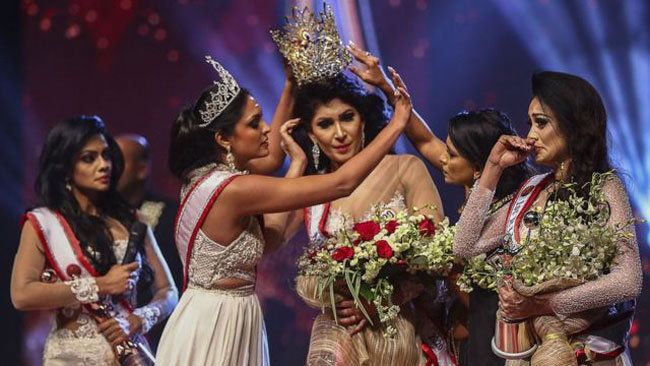 Reigning Mrs. World Caroline Jurie and model Chula Padmendra have been arrested by the Cinnamon Gardens Police over the controversy at the Mrs. Sri Lanka beauty pageant held at the Nelum Pokuna Theatre recently.

Mrs. Sri Lanka Pushpika de Silva had lodged a complaint with the Police over injuries and trauma caused to her during the melee that took place during her crowning.

Consequently, on April 06, Mrs. World Caroline Julie recorded a statement with the Cinnamon Gardens Police on the incident.

Pushpika de Silva was crowned as the new Mrs. Sri Lanka at the pageant only for the crown to be snatched from her and passed on to the first runner-up over allegations of divorce.

The melee at the pageant known for its celebration of grace and beauty was widely criticized by the public.

Subsequently, Pushpika de Silva lodged a complaint with the Police that she had to be hospitalized for head injuries from her crown being ripped off, plus trauma caused by the episode.

However, on April 05, it was announced that Pushpika de Silva would retain her title as Mrs. Sri Lanka for the year 2021.

Meanwhile, Mrs. World Inc issuing a statement expressed their regret regarding the behavior of their current titleholder, Caroline Jurie and stated that action will be taken on her based on an assessment of the incident at the pageant.