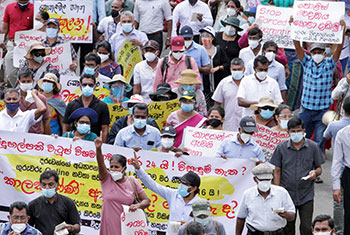 Trade unions of teachers and principals have decided to withdraw from duties of G.C.E. Ordinary Level practical examination which is scheduled to commence on Monday (July 26).

Reportedly, they resorted to this decision as the salary anomaly issue remains unresolved.

The trade unions have informed their decision in writing to the Ministry of Education.

Speaking to AdaDerana on the matter, General Secretary of Ceylon Teachers’ Union (CTU) Joseph Stalin stressed that the trade unions expect a speedy solution for their issue.

A total of 17 trade unions representing school principals and teachers including the Ceylon Independent Teachers’ Services Union (ITSU) had joined the said strike.