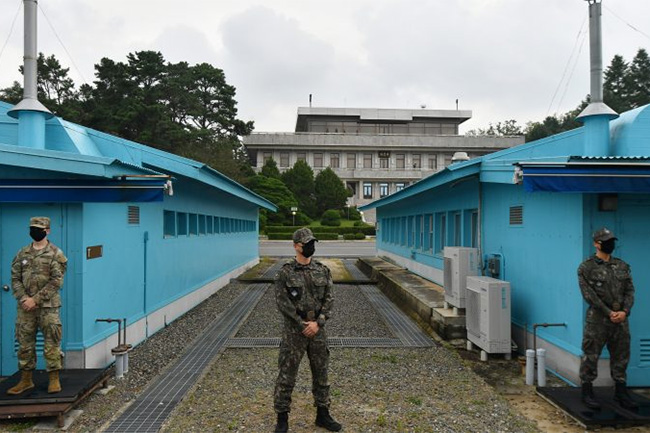 South Korea and North Korea re-established key communication channels on Tuesday morning at 10 a.m., the Blue House said on Tuesday, adding that the two Koreas have also been in active communication through letters between their respective leaders since April this year.

The news comes more than a year after North Korea announced it would sever all inter-Korean hotlines on June 9, 2020 after accusing the Moon Jae-in government of allowing anti-DPRK leaflets into North Korea. South Korea’s unification ministry said that day that North Korea did not respond to multiple phone calls from the South.

“In this process, [they] agreed to restore the severed communication line as a priority,” the Blue House went on. It explained that Moon and Kim also agreed to restore mutual trust as soon as possible and work to improve relations once again.

The Blue House later in the day added that the letters Moon and Kim exchanged in April this year was written to mark the third-year anniversary of the Panmunjom summit in 2018. There was no discussion so far about any in-person or video summit meetings between the two leaders, the Blue House also said.

Relations between the two Koreas flourished in 2018, when Moon and Kim met three times. However, after the U.S.-DPRK summit in Hanoi ended without a deal in 2019, inter-Korean relations quickly soured as well.

According to the Blue House, South and North Korea spoke on the phone via a reconnected hotline, describing the exchange as a “launching” call. “We hope that the restoration of the inter-Korean communication line will improve and develop inter-Korean relations,” it said.

Some 48 hotlines are known to connect the two Koreas, including nine directly between the two countries’ militaries. Among the hotlines, the channels that used to be operated by the unification ministry and the military were restored on Tuesday as priorities for now, the Blue House added later in the day.

Although North Korea announced it had “cut” all hotlines with South Korea — meaning they are not picking up the phone for regular communications — Moon and Kim still exchanged letters, transmitting greetings as well as condolences during the COVID-19 pandemic and following natural disasters.

“It’s not that they physically cut the line and are now reconnecting it,” said Cha Du-hyeogn, a ROK-DPRK-U.S. relations expert at the Asan Institute for Policy Studies. “It’s that they’ve not been responding via the existing line.”

In Sept. 2020, North Korean soldiers shot and killed a South Korean government worker crossing the inter-Korean maritime border, an incident Kim Jong Un apologized for in a personal letter to Moon. A note from Pyongyang’s United Front Department was also delivered to Seoul explaining North Korea’s side of the story through an unspecified medium.

Cha said that there are still some roadblocks ahead to what’s going to be discussed over the hotline.

“There are still some constraints for major projects to be carried out through [inter-Korean cooperation],” Cha said. “If North Korea says it will work on exchanges and cooperation that can be done under sanctions, that’s a change of position from the North — then that’s something to welcome.”

He also noted that there should also be some breakthrough between Pyongyang and Washington for meaningful development in inter-Korean cooperation.

Following the Blue House announcement, South Korea’s unification ministry spokesperson Lee Jong-joo said at a press conference that after a technical check at 10 a.m., the phone call was made between the South and North from 11:04 to 11:07 a.m. through the inter-Korean liaison office channel.

“At 10 a.m., the unification ministry made a phone call through the inter-Korean hotline installed at Panmunjom and the inter-Korean liaison office,” Lee said. “We hope that communication between the two Koreas will continue uninterrupted and that various inter-Korean issues can be discussed and that [agenda] items agreed upon can be carried out.”

An official from the unification ministry clarified to NK News that the resumption of calls between the South and the North’s inter-Korean liaison office channel is currently being done by ministry staff in Seoul, not Kaesong, where the demolished office building sits.