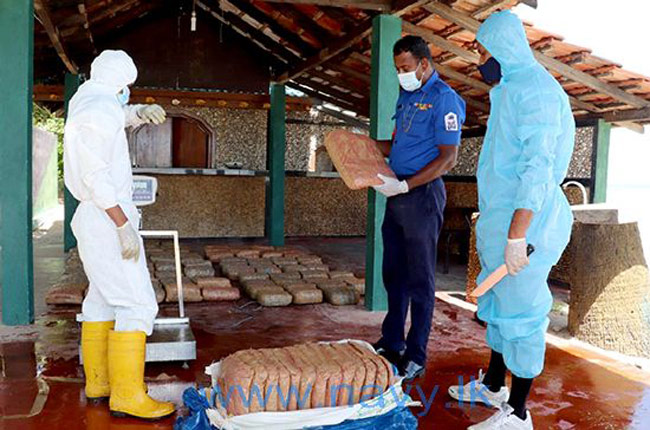 Over 417 kg of Kerala Cannabis seized by Navy

Sri Lanka Navy took hold of over 417 kg of Kerala cannabis, during a special operation, conducted in the sea area extending from Madagal to Point Pedro, Jaffna in the dark hours of yesterday (July 27).

The operation also made way to apprehend 03 suspects and a dinghy used for this racket, Sri Lanka Navy said.

The 04th Fast Attack Craft Flotilla (4 FAF) together with the Northern Naval Command searched a number of dinghies in northern waters during this special operation off Madagal to Point Pedro.

As the search was ongoing, one dinghy escaped from the scene dropping few sacks into the water. This made Inshore Patrol Craft P 177 chase after the suspicious dinghy, ultimately intercepting it with 03 suspects aboard.

A subsequent search in the Madagal sea area by boat patrols of Sri Lanka Naval Ship (SLNS) ‘Agbo’ recovered 08 polythene sacks cast away by the suspicious dinghy and about 417kg and 200g of Kerala cannabis (in 125 packages) were found from the sacks.

The street value of the apprehended stock of Kerala cannabis is believed to be over Rs. 125 million.

The operation was carried out adhering to the COVID-19 protocols in place due to pandemic concerns.

The 03 accused held in the operation were identified as a resident of Thondamanaru and Guru Nagar of ages 20 to 40 years.

The suspects along with the stock of Kerala cannabis and dinghy will be handed over to the Ilawalei Police for onward legal action, the Navy said.