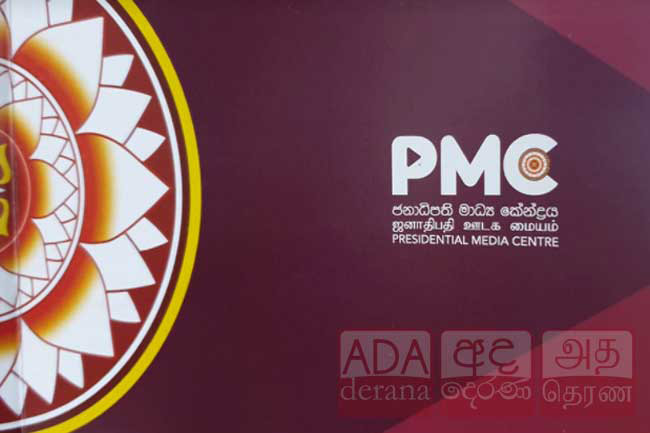 The Presidential Media Centre (PMC) was declared open today (29) under the patronage of Senior Advisor to President, Lalith Weeratunga.

The media centre is located at the ground floor of the old Chartered Bank building in front of the President’s House in Colombo Fort.

The Presidential Media Centre aims to provide accurate and efficient information to the media and the public on the progress of the implementation of programmes to fulfill the pledges made to the people in the policy statement, “Vistas of Prosperity and Splendour”.

During this weekly media briefing, journalists get an opportunity to ask questions directly or via online from the President’s Spokesman and government officials on selected topics. The Media Centre is equipped with a number of facilities and it can host up to 40 journalists at a time.

President’s Senior Advisor Lalith Weeratunga said that he believed that the Presidential Media Centre would help to build a comprehensive new media culture that goes beyond the popular media culture.

The journalists were briefed today on the progress and future plans of the COVID-19 vaccination drive. Responding to the questions directed by the journalists, Mr. Weeratunga said that the vaccination of all citizens over the age of 30 would be completed by September 15th. He also added that the plans have been made to vaccinate all between the age group of 18-30 and will be implemented as soon as the recommendations of the World Health Organization are received.

“According to a recent report, over 90% of the vaccines have been shared among the wealthiest countries in the world while only less than 5% of global vaccines have been distributed among the developing countries. Therefore, the progress made by Sri Lanka in acquiring vaccine stocks is a great accomplishment,” Mr. Weeratunga added.

Director General of the President’s Media Division Sudewa Hettiarachchi noted that it is the responsibility of all the journalists to make the Presidential Media Centre a unique facility for sharing accurate information.

Spokesperson to the President, Kingsly Rathnayaka highlighted that the Presidential Media Centre could be introduced as one of the foremost steps taken to fulfill the President’s promise to provide accurate information to the public as envisioned in the national policy framework “Vistas of Prosperity and Splendour”.

He briefed the media at length on the progress made by the COVID-19 vaccination drive and the steps taken by the President to carry it out more effectively.