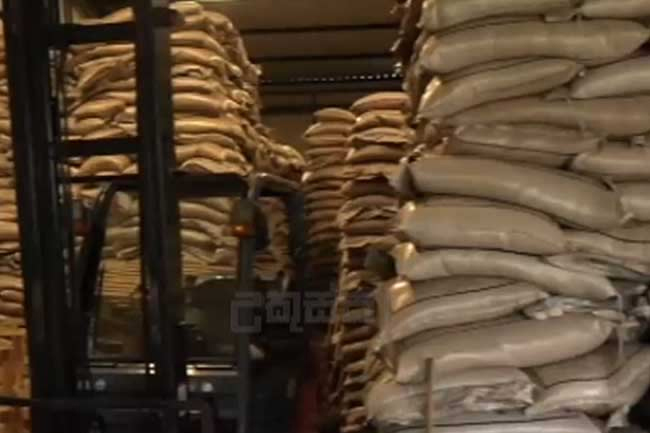 Three more warehouses that had been stashing away 655 tons of sugar were uncovered today (August 29) following Ada Derana ‘Ukussa’ revelation on the truth behind the artificial market shortage of sugar.

On Saturday (Aug. 28), Ada Derana ‘Ukussa’ programme shed light on a certain businessman who had created an artificial shortage of sugar in the market by holding large volumes of the product.

Accordingly, 4,800 tons of sugar were found stashed away in a warehouse in Mabola, Wattala against the backdrop of fraudulent traders raising the price of sugar to Rs. 220 per kilogram.

Similarly, Ada Derana was also able to expose another warehouse in Bandarawatta, Seeduwa that had stockpiled 61 tons of sugar. The revelation was made based on a tip-off received today.

Upon inspecting the warehouse, the officials of the Consumer Affairs Authority (CAA) uncovered that it was operated without licence.

The officials advised the owner of the warehouse and the sugar importers to provide necessary documents to the CAA tomorrow (August 30) to prove their legitimacy.

In another development, another warehouse stashing away tons of sugar was discovered from Pattiwila area in Kelaniya.

A team of officers attached to the Kelaniya Police who visited the said warehouse found out that the establishment was already sealed off by a private bank.

According to the statement of its security guard, sugar stocks had been brought to the warehouse last December, and were taken out in bulks after eight long months.

In a subsequent raid, another warehouse, also located in Seeduwa, was sealed off by CAA officials who acted on a tip-off received by the army intelligence unit.

A large consignment containing 594 tons of sugar was found inside the warehouse which had been operating without a licence. According to reports, these stocks of sugar were manufactured in around November last years, when the government published a gazette notification announcing a maximum retail price of Rs. 85 on the product.

In this backdrop, State Minister of Cooperative Services, Marketing Development and Consumer Protection Lasantha Alagiyawanna stated that a maximum price of Rs.130 will be implemented on brown sugar from Wednesday (Sep. 01) through Sathosa and Co-operative outlets network.