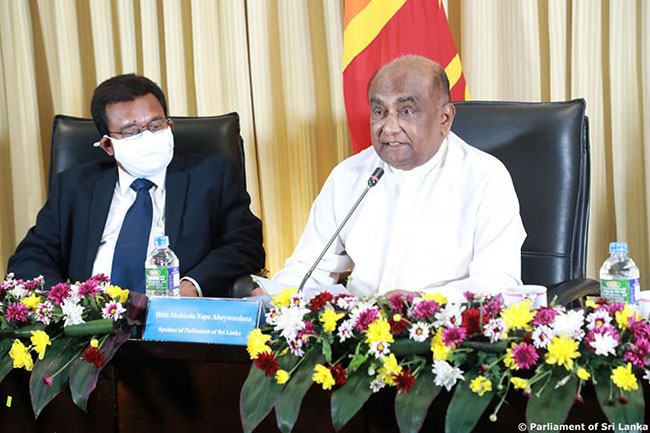 Speaker Mahinda Yapa Abeywardena says that as the largest democracy in the world, the manner in which India’s legislature functions in a multi- religious, multi-ethnic society offers many valuable lessons not only for Sri Lanka as neighbors, but even to the scholars of democratic governance.

The Speaker of the Parliament of Sri Lanka yesterday (15) addressed the All India Presiding Officers Conference (AIPOC) as a guest of honor, which was organized by the Indian Lok Sabha through video technology.

The conference was held under the theme, “The Role of Legislature in Fostering Effective and Meaningful Democracy” to mark the Centennial year of the “All India Presiding Officers Conference” (AIPOC) as well as the International Day of Democracy which is celebrated on the 15th September every year.

The Secretary General of Parliament of Sri Lanka Mr. Dhammika Dassanayake was also in attendance at the conference held via video conference.

Addressing the conference, Speaker Mahinda Yapa Abeywardena pointed out that the economic and democratic cooperation between Sri Lanka and India, both in the past and in recent times, is significant.

“Parliament of Sri Lanka is the oldest parliament elected by universal adult franchise in Asia. As the largest democracy in the world, how India’s legislature functions in a multi- religious, multi-ethnic society offers many valuable lessons for not only us as neighbors, but even to the scholars of democratic governance,” the speaker added.

He further said that Shri Narendra Modi, Prime Minister of India addressed the Parliament of Sri Lanka in 2015 during his historical visit, which strengthened the bilateral relationship between the two countries.

The Speaker also said that Parliament of Sri Lanka has adopted a policy of open parliament with the intention of enhancing citizen participation and engagement in the parliamentary process.

He also said that Parliament has taken steps recently to reach the public through the newly established Department of Communications. “It is expected to expand the knowledge on Parliamentary process and uphold democracy amongst the population, particularly targeting the school children who are the future flag bearers of democracy,” he said.

The speaker also mentioned that “After the enactment of the Right to Information Bill, the Parliament of Sri Lanka took a decision to open the sessions of the committees to media and this was a significant step towards strengthening parliamentary democratic system that will pave the way for greater transparency and accountability”.

The Speaker added that “Parliament of Sri Lanka has a vibrant committee system which play a key role in creating a forum for the Parliamentarians and the Ministers of the Cabinet to interact directly in addressing many relevant issues which falls within their respective portfolios”.

He also said despite the Covid -19 challenge Parliament has continued with its usual sittings even though the number of sittings days were curtailed to minimize the risk.