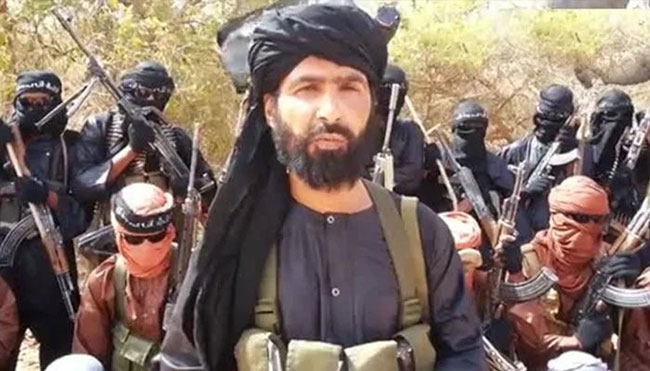 France said Thursday that its troops deployed in Africa’s Sahel region had killed the head of the Islamic State in the Greater Sahara, who had been hunted for years over deadly attacks on US soldiers and French aid workers.

Adnan Abu Walid al-Sahrawi formed the ISGS in 2015 after splitting with jihadist linked to Al-Qaeda and pledging allegiance to the Islamic State (IS) group, which at the time controlled swathes of Iraq and Syria.

Sahrawi was “neutralised by French forces,” President Emmanuel Macron tweeted early Thursday, calling it “another major success in our fight against terrorist groups in the Sahel.”

Defence Minister Florence Parly told a news conference that Sahrawi was killed in mid-August by France’s Barkhane force, which battles jihadists across the arid expanses in the Sahel region of Western Africa.

He was one of two people killed by a drone strike on a motorbike around Indelimane in northern Mali, France’s armies chief of staff Thierry Burkhard said at the conference.

Parly added that Sahrawi’s identify had only now been confirmed.

“He was the absolute chief of ISGS and took all decisions,” she said.

She called his death a “decisive blow” both to IS command structures in the region and also “to its cohesion, as ISGS will no doubt have difficulty replacing its emir with a figure of the same stature.”

Parly said Sahrawi had “personally ordered” the attack that led to the killing of six French aid workers and their two local guides while visiting a wildlife park in Niger in August 2020.

He was also wanted by the United States over an October 4, 2017, attack in Niger that killed four US Special Forces and four Niger soldiers. Washington had offered a $5 million reward for information on Sahrawi’s whereabouts.

The group is also blamed for most of the jihadist attacks in Mali, Niger and Burkina Faso.

In late 2019, the group carried out a series of large-scale attacks against military bases in Mali and Niger.

The flashpoint “tri-border” area is frequently targeted by ISGS and the Al-Qaeda-affiliated Group for the Support of Islam and Muslims (GSIM) with deadly attacks against civilians and soldiers.

A former member of Western Sahara’s Polisario Front independence movement, Sahrawi joined Al-Qaeda in the Islamic Maghreb (AQIM) and had also co-led Mujao, a Malian Islamist group responsible for kidnapping Spanish aid workers in Algeria and a group of Algerian diplomats in Mali in 2012.

The French military has killed several high-ranking members of ISGS under its strategy of targeting jihadist leaders since the start of its military intervention in Mali in 2013.

But in June this year, Macron announced a major scaleback in France’s anti-jihadist Barkhane force in the Sahel after more than eight years of military presence in the vast region to refocus on counter-terrorism operations and supporting local forces.

“We are not leaving Mali but adapting our military deployment,” Parly said. “Our fight continues.”

The north of Mali fell under jihadist control in 2012 until they were pushed out of the cities by France’s military intervention in 2013.

But Mali, a poor and landlocked nation home to at least 20 ethnic groups, continues to battle jihadist attacks and intercommunal violence, which often spills over to neighbouring countries.

In a rare public appearance at the news conference, the head of France’s DGSE external intelligence service, Bernard Emie, said that ISGS had been severely weakened but still posed a threat.

“We cannot say that its capacities do not exist anymore and we have seen it rebuilding around a certain number of community-based leaders since the international leaders have been increasingly neutralised,” he said.