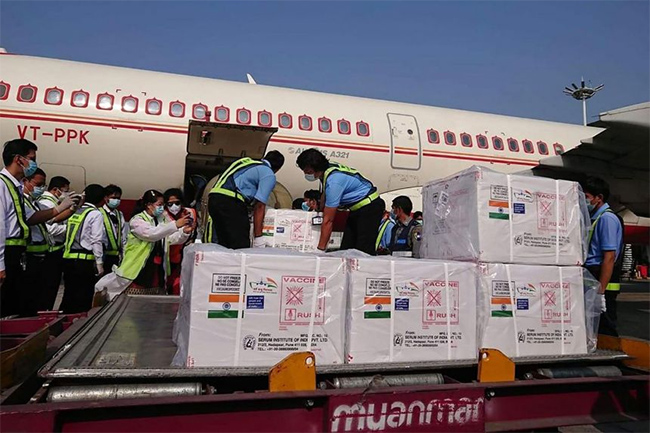 The world’s largest vaccine producer had halted exports in April to cater to domestic demand as infections shot up.

The announcement comes as Prime Minister Narendra Modi visits Washington on Tuesday for a summit of the Quad leaders - US, India, Japan and Australia.

Officials say vaccines exports are likely to be discussed at the meeting.

Mr Mandaviya said India’s vaccine manufacturers “are expected to produce more than 300 million doses” in October for the country’s own vaccination drive and that any surplus supplies would be sent to other countries in the global fight against Covid-19.

“We will help the world, and through Covax we will also fulfil our responsibility,” he told reporters on Monday.

Covax is a multilateral initiative which aims to provide access to Covid vaccines to all countries globally, led by the Global Vaccine Alliance (Gavi), the World Health Organisation (WHO) and Coalition for Epidemic Preparedness Innovations (CEPI).

Mr Mandaviya said the government was expected to receive 260 million doses from domestic manufacturers this month.

“The production will further increase. Biological E (a Covid vaccine developed in collaboration with US-based Dynavax and Baylor College of Medicine) and other manufacturers will also bring their vaccines to the market,” he added.

India wants to vaccinate its adult population by the end of 2021. It has given more than 818 million doses of the three approved jabs since the beginning of the vaccination drive in January.

On Friday, it administered a record-breaking 20 million doses - surpassing the country’s previous best tally of more than 13 million jabs on 27 August.

So far, more than 609 million - more than half of India’s eligible population - have received at least one dose. Only 21% of eligible adults are fully vaccinated.

Most countries, especially those in the developing world, have struggled to get vaccines after India halted exports following a devastating second wave of infections in April and botched government orders for vaccines.

Before the ban came into place, India had exported more than 60 million vaccine doses to 76 countries, with the majority being the Oxford-AstraZeneca jab, Covishield.