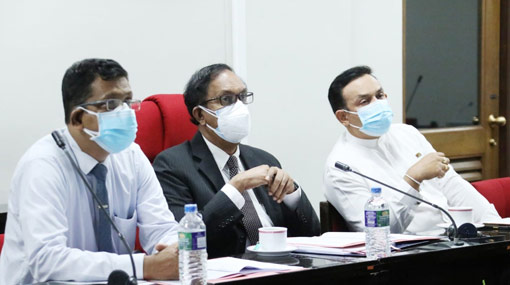 Immigrants & Emigrants Act to be amended to increase visa validity

The Immigrants & Emigrants (Amendment) Bill, which seeks to encourage foreign investors to extend the validity of visas to five years was considered by the Ministerial Consultative Committee on Defence today (22).

Accordingly, the Committee agreed to present it to Parliament for a second reading.

The Consultative Committee on Defence chaired by Chamal Rajapaksa, State Minister of National Security & Disaster Management met today, under the chairmanship of Anura Priyadharshana Yapa, Member of Parliament. Major Pradeep Undugoda, Charles Nirmalanathan, and Tiran Allas were also present at this meeting. Officials including the Controller General of Immigration and Emigration U. V. Sarath Rupasiri joined the committee meeting via technology.

According to the Bill, Section 14 of the Immigrants & Emigrants Act No. 20 of 1948 will be amended to increase the current visa issuance period from 02 to 05 years, said Controller General of Immigration and Emigration U. V. Sarath Rupasiri.

Furthermore, he stated that the period for which visas can be granted with the approval of the Minister, will be further increased from 05 years to 10 years.

It was also revealed that these amendments will introduce the Permanent Resident Visa status and the relevant regulations will be formulated in the future.

The Controller General of Immigration and Emigration pointed out that the issuance of long-term visas has a number of socio-economic benefits, including providing a safer environment for foreign investors to invest in businesses.