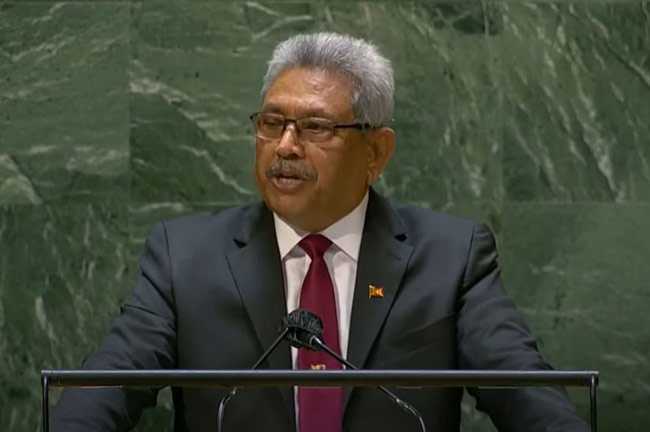 President Gotabaya Rajapaksa says that an international mechanism is needed for developing countries to overcome the current economic instability.

The President stated that Sri Lanka benefitted greatly from financial and material support provided by bilateral and multilateral donors to manage the pandemic, and thanked those nations and institutions for their generosity. He added that the increased global cooperation visible during this ongoing crisis is greatly encouraging.

President Rajapaksa stressed that the economic impact of the pandemic has been especially severe on developing countries. This has placed the implementation of the 2030 Agenda for Sustainable Development Goals at considerable risk, he said.

“It is vital that more initiatives including development financing and debt relief be adopted through international mechanisms to support developing nations and help them emerge from this uncertain situation.”

Stating that violence has robbed Sri Lanka of thousands of lives and decades of prosperity in the past half-century, President Rajapaksa stated that international cooperation in the exchange of intelligence is necessary to win against global terrorism.

President Rajapaksa also spoke on Sri Lanka’s actions towards a healthier planet. He said that decisive and urgent multilateral action is required to address the grave threats posed by climate change and the loss of biodiversity.

Sri Lankan government has completely banned the use of chemical fertilizer, pesticides, and weedicides considering its impact on soil fertility, biodiversity, waterways, and health, the President said. Production and adoption of organic fertilizer, as well as investments into organic agriculture, are now incentivized in Sri Lanka, President Rajapaksa stated.