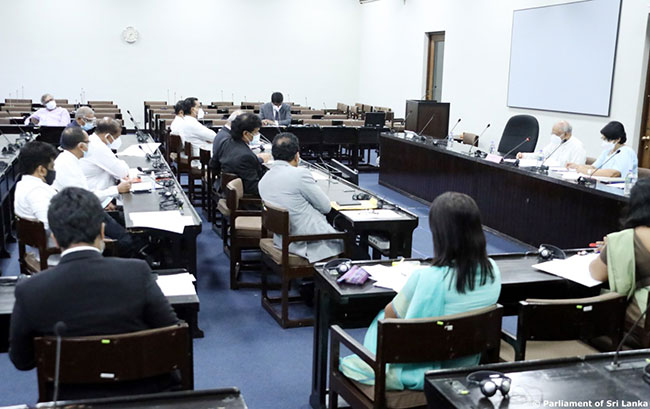 It is the general opinion of the Parliamentary Select Committee on election reforms that the Provincial Council Elections should be held expeditiously, said the committee’s chairman and Leader of the House, Minister Dinesh Gunawardena.

He also said that a request has already been made to obtain the recommendations of the Attorney General’s Department regarding the steps to be taken to hold the election expeditiously.

He made these observations during yesterday’s meeting of the Select Committee of Parliament to Identify Appropriate Reforms of the Election Laws and the Electoral System and to Recommend Necessary Amendments.

Member of Parliament Ven. Athuraliye Rathana Thero who testified on behalf of the ‘Our Power of People Party’ (Ape Janabala Pakshaya) said that it would be appropriate to abolish the existing preferential electoral system completely.

Ven. Rathana Thero also pointed out the need to have a Member of Parliament responsible for a division. Ven. Rathana Thero further stated that the representation of minority parties should be ensured and a culture of ideological politics should be created in the country.

Ven. Thero further stated that criteria should be formulated regarding the control of election expenses and that democratic principles should be introduced to political parties.

Speaking at the committee on behalf of the Samagi Jana Balawegaya (SJB), the party’s chief executive, former minister Ajith. P. Perera, said that the 20th amendment to the constitution had given power to other parties. He also pointed out that a policy of checks and balances should be implemented between the executive, the legislature and the judiciary.

He also said that in all electoral reforms, the right to vote should be guaranteed as a part of the sovereignty of the people and the principles of democracy should be upheld there.

Mr. Perera further stated that it was very important that all elections be held freely and fairly. He also emphasized in the Committee that Parliamentary, Provincial Council and Local Government elections should be held under the Proportional Representation System.

He pointed out that new laws should be enacted to regulate the financial expenditure of the election campaign and to ensure the representation of youth and women.

Mr. Ajith P. Perera suggested in the Committee that dual citizenship should be a disqualification to contest elections and that a system should be set up for the proper registration of all eligible voters.

The “Samagi Jana Balawegaya” also stressed the need for equal distribution of state and private media airtime between the parties contesting the elections. Member of Parliament Kabir Hashim stated that there should be an election schedule in the country to ensure the right of the people to vote.

Officials from the Delimitation Commission and the Attorney General’s Department also participated in the committee meeting. The next meeting of the Parliamentary Select Committee is scheduled to be held on the 29th of September, said the Secretary to the Select Committee, Deputy Secretary General & Chief of Staff of Parliament Ms. Kushani Rohanadheera.