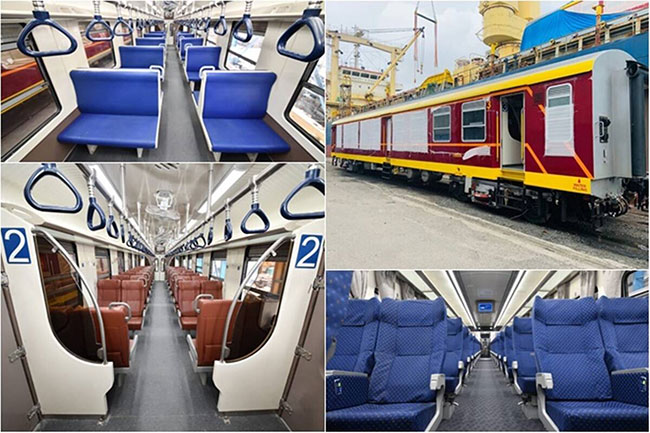 He was addressing a media briefing organized by the Department of Government Information today (24) to make aware the people of the measures taken to develop the railway service.

Fifty compartments out of the order that has been placed have reached the country already. The rest of the order is expected soon in the country. He also said that plans are afoot to import an air-conditioned – 550-seater train to be deployed on long-distance services.

The General Manager who pointed out that the development of the country’s railway service is a practical solution to the current vehicular traffic congestion said that several special projects have been identified in this regard.

Major among the particular project is the extension of the main line up to Battaramulla and introducing an electric train service. It has been identified that railway line should be extended up to the Capital City as a solution to the transport issue of the Government servants and the hectic traffic jams in Colombo and its suburbs.

Electric Train is to be introduced to facilitate the majority of commuters – 70% out of the total passengers, who travel between Panadura and Veyangoda, and Polgahawela and Kalutara. Accordingly, the proposed electric train service is expected to attract over six hundred thousand passengers.

In addition, work has been started to construct two-way lines from Polhagawela to Maho via Kurunegala, and from Payagala South to Aluthgama, and Colombo to Homagama on the Kelaniweli line.

Sri Lanka Railway is conspicuous in the field of tourism. The first Railway journey took place from Colombo Fort to Ambepussa in 1864. The Department has planned to mark this event by running a coal-powered train between the two destinations intending to attract local and foreign tourists towards the service.

Although passenger services are not currently operating due to the Coronavirus pandemic, eight Cargo and fuel tankers are running daily. The Department is ready to run normal services under the health guidelines of the Government after the travel restrictions are lifted in the near future, Railway General Manager said.