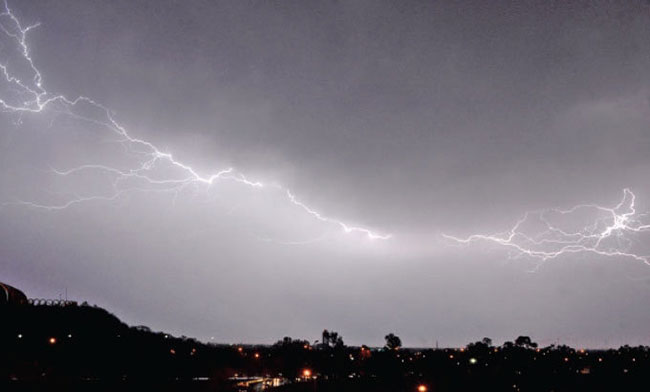 The Department of Meteorology says that showers or thundershowers will occur at times in the Western, Sabaragamuwa, Central and Northwestern provinces and in Galle and Matara districts.

Heavy showers above 100 mm can be expected at some places in Sabaragamuwa province and Kandy, Nuwara Eliya, Kaluthara, Galle and Matara districts.

Showers or thundershowers will occur at several places elsewhere, it said.

Wind speed can be increased up to (50-60) kmph at times over the island particularly in the western slope of central hills, Northern, North-Central, North-Western, Southern and Western provinces.

Naval and fishing communities are advised to be vigilant in the sea areas around latitude 15.0N and 20.0N longitude 80.0E and 90.0E.

Winds will be westerly to south-westerly in direction and wind speed will be (40-50) kmph in the sea areas around the island. The wind speed can be increased up to (60-70) kmph at times in the sea areas extending from Mannar to Pottuvil via Puttalam, Colombo, Galle and Hambantota.

There is a possibility that near shore sea areas off the coast extending from Colombo to Pottuvil via Galle and Hambantota may experience swell waves, having (2.0 - 2.5) m height.

Naval and fishing communities are advised not to venture into the sea areas and those who are currently positioned within this area are advised to move on to safer locations until further notice.