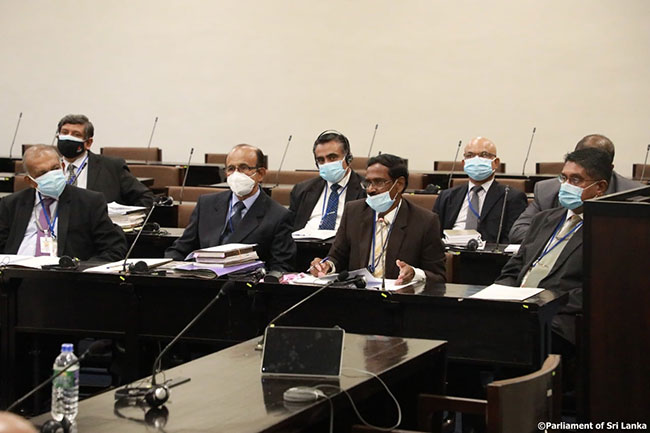 Election Comm. proposes mechanism for declaring assets and liabilities when handing over nominations

A mechanism for declaring assets and liabilities should be set up at the time of handing over nominations, the Election Commission of Sri Lanka has proposed at the Parliamentary Select Committee to Identify Appropriate Reforms of the Election Laws and the Electoral System.

He also said that it was essential that the media criteria be presented to Parliament for approval. He also stressed that there should be a systematic program to regulate the media and social media during the election season.

The Chair of the Parliamentary Select Committee Leader of the House, Minister Dinesh Gunawardena requested the Election Commission to support the expeditious holding of the Provincial Council Elections which are continuously delayed due to various reasons.

The Elections Commission also stated that a comprehensive amendment should be made to the existing method of disposing the deposits of candidates under the current Local Government Election Act.

The commission also suggested that a mobile voting system be set up for the disabled. The Elections Commission also said that new amendments should be made to allow the visually impaired to cast their ballots through a brail system.

They also pointed out that a new program should be implemented to protect the suffrage of foreign workers.

At the time of handing over the nominations, the Elections Commission stated that a mechanism for declaring assets and liabilities should be activated and steps should be taken to legalize election ethics.

The Commission was of the view that an electronic method of counting votes should be adopted. The Chairman of the Committee pointed out that it is more practical to count the votes at the polling booth itself.

Committee members also pointed out to the Elections Commission that there have been reports of single persons being registered in the Electoral Roll at two locations.

The Commission emphasized in the Committee that strikes and protests during the election period are a major obstacle to a free and fair election.

The need to hold a by-election to fill a vacancy created by a Member of Parliament vacating their seat was also discussed in the Committee.