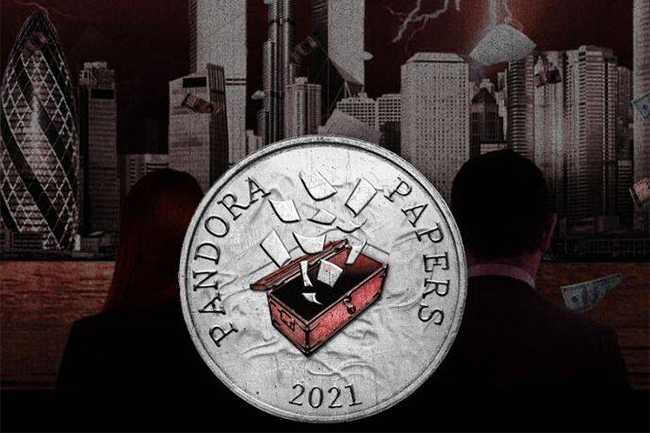 Former minister Nirupama Rajapaksa and her husband Nadesan, as documented by the Pandora Papers, are the actual economic beneficiaries of an offshore company, managed by a Singapore trust firm, used to purchase luxury residences in London and Sydney, Australia.

The anonymous real estate safe is still active in 201 9, when the available documents stop, it states.

A former Member of Parliament, Nirupama served as deputy minister of water supply and drainage from 2010 to 2015.

The secret wealth and dealings of world leaders, politicians and billionaires has been exposed in one of the biggest leaks of financial documents.

Some 35 current and former leaders and more than 300 public officials are featured in the files from offshore companies, dubbed the Pandora Papers.

They reveal the King of Jordan secretly amassed £70m of UK and US property.

They also show how ex-UK PM Tony Blair and his wife saved £312,000 in stamp duty when they bought a London office.

The couple bought an offshore firm that owned the building.

The leak also links Russian President Vladimir Putin to secret assets in Monaco, and shows the Czech Prime Minister Andrej Babis - facing an election later this week - failed to declare an offshore investment company used to purchase two villas for £12m in the south of France.

It is the latest in a string of leaks over the past seven years, following the FinCen Files, the Paradise Papers, the Panama Papers and LuxLeaks.

The examination of the files is the largest organised by the International Consortium of Investigative Journalists (ICIJ), with more than 650 reporters taking part.

BBC Panorama in a joint investigation with the Guardian and the other media partners have had access to 12 million documents from 14 financial services companies in countries including the British Virgin Islands, Panama, Belize, Cyprus, the United Arab Emirates, Singapore and Switzerland.

Some figures are facing allegations of corruption, money laundering and global tax avoidance.

But one of the biggest revelations is how prominent and wealthy people have been legally setting up companies to secretly buy property in the UK.

The documents reveal the owners of some of the 95,000 offshore firms behind the purchases.

It highlights the UK government’s failure to introduce a register of offshore property owners despite repeated promises to do so, amid concerns some property buyers could be hiding money-laundering activities.

The Azerbaijani President Ilham Aliyev and his family, who have been accused of looting their own country, are one example.

The investigation found the Aliyevs and their close associates have secretly been involved in property deals in the UK worth more than £400m.

The revelations could prove embarrassing for the UK government, as the Aliyevs appear to have made a £31m profit after selling one of their London properties to the Crown Estate - the Queen’s property empire that is managed by The Treasury and raises cash for the nation.

Many of the transactions in the documents involve no legal wrongdoing.

But Fergus Shiel, from the ICIJ, said: “There’s never been anything on this scale and it shows the reality of what offshore companies can offer to help people hide dodgy cash or avoid tax.”

He added: “They are using those offshore accounts, those offshore trusts, to buy hundreds of millions of dollars of property in other countries, and to enrich their own families, at the expense of their citizens.”

The ICIJ believes the investigation is “opening a box on a lot of things” - hence the name Pandora Papers.

The leaked financial documents show how the King of Jordan secretly amassed a property empire in the UK and US worth more than £70m (over $100m).

They identify a network of offshore companies in the British Virgin Islands and other tax havens used by Abdullah II bin Al-Hussein to buy 15 homes since he assumed power in 1999.

His property interests have been built up as King Abdullah has been accused of presiding over an authoritarian regime, with protests taking place in recent years amid austerity measures and tax rises.

Lawyers for King Abdullah said all the properties were bought with personal wealth, which he also uses to fund projects for Jordan’s citizens.

They said it was common practice for high profile individuals to purchase properties via offshore companies for privacy and security reasons.

Among the other revelations in the Pandora Papers:

• Kenya President Uhuru Kenyatta and six members of his family secretly owned a network of offshore companies. They have been linked to 11 firms - one of which was valued as holding assets of $30m

• The law firm founded by President Nicos Anastasiades of Cyprus appears to have provided fake owners to disguise the real owner of a series of offshore companies - a former Russian politician who had been accused of embezzlement. However, the law firm denies this

• Ecuador President Guillermo Lasso, a former banker, replaced a Panamanian foundation that made monthly payments to his close family members with a trust based in South Dakota in the US

There is no suggestion in the Pandora Papers that Tony and Cherie Blair were hiding their wealth.

But documents show why stamp duty was not payable when the couple bought a £6.45m property.

The former Labour prime minister and his barrister wife Cherie acquired the building in Marylebone, central London, in July 2017 by buying the offshore company that owned it.

It is legal to acquire properties in the UK in this way and stamp duty does not have to be paid - but Mr Blair has previously been critical of tax loopholes.

The townhouse in Marylebone, central London, is now home to Mrs Blair’s legal consultancy, which advises governments around the world, as well as her foundation for women.

Mrs Blair said the sellers had insisted they buy the house through the offshore company.

She said they had brought the property back under UK rules and will be liable to pay capital gains tax if they sell it in future.

The ultimate owners of the property were a family with political connections in Bahrain - but both parties say they did not initially know who they were dealing with.

The boy who owned a £33m London property

The files show how the family - long accused of corruption in the central Asian nation - bought 17 properties, including a £33m office block in London for the president’s 11-year-old son Heyder Aliyev.

The building in Mayfair was bought by a front company owned by a family friend of President Ilham in 2009.

It was transferred one month later to Hedyer.

The research also reveals how another office block owned by the family nearby was sold to the Crown Estate for £66m in 2018.

The Crown Estate said it carried out the checks required in law at the time of purchase but is now looking into the matter.

The UK government says it is cracking down on money laundering with tougher laws and enforcement, and that it will introduce a register of offshore companies owning UK property when parliamentary time allows.

The Pandora Papers is a leak of almost 12 million documents and files exposing the secret wealth and dealings of world leaders, politicians and billionaires. The data was obtained by the International Consortium of Investigative Journalists in Washington DC and has led to one of the biggest ever global investigations. More than 600 journalists from 117 countries have looked at the hidden fortunes of some of the most powerful people on the planet. BBC Panorama and the Guardian have led the investigation in the UK.