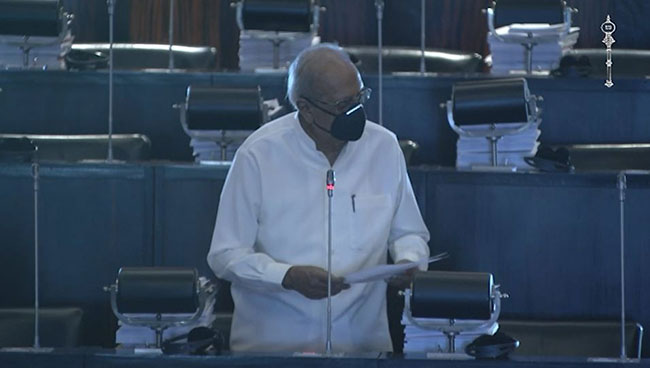 Report on 16 investigations by COPA tabled in Parliament

The Second Report of the Committee on Public Accounts (COPA) for the First Session of the Ninth Parliament was presented to Parliament today (06) by its chairman, (Prof.) Tissa Vitarana.

The report was tabled in Parliament in terms with Standing Order 119 of Parliament.

This report contains information on 16 investigations carried out by the Committee, said Member of Parliament (Prof.) Tissa Vitarana, when presenting it.

The report also focuses on the current status of the Muthurajawela wetland and Human-Elephant Conflict, which had been a very controversial matter among the public.

The report also focuses on the loss of ability to reduce the road accidents by half due to the shortcomings of the technical equipment required to the Sri Lanka Police who play a significant role in road safety and also points the necessity to transform the National Council on Road Safety into a National Commission.

The committee report submitted to Parliament states that as a solution to the Human-Elephant Conflict, there is a possibility of adopting a mixed system that suits each area.

The Committee report point out that the method of constructing the fences around the village proposed by Dr. Pruthiviraj Fernando is a method that has been successful at present and that it is important to obtain the financial contribution of the villagers for the maintenance of this fence and thereby motivating them to protect it.

The committee report also observed that despite spending more than 10 percent of government revenue annually on education, some school children do not receive a quality education.

The Committee Report has pointed out that there is a severe disparity in the distribution of resources in the field of education in the country and there is a need to take immediate action to eliminate this situation.

The Committee pointed out that during the customs investigation on the importation of coal required for Norochcholai Thermal Power Plant, it was observed that a penalty of Rs. 205 million had been imposed and recovered.

The Committee also pointed out that the Government lost Rs. 125.5 million due to the fact that VAT has been levied as a penalty instead being levied as an additional tax.

The report also states that out of the computer programmes of the Inland Revenue Department in this regard, the amount of tax in arrears pertaining to the institutions identified with respect to Legacy system as at 30 March 2021 is Rs. 18 billion. Out of this amount, only Rs. 424 million has been recovered in cash.

The Committee report also states that according to the RAMIS system of the Inland revenue Department, the tax in arrears on that day was Rs. 87 billion. Of this amount, only Rs. 4 billion had been recovered in cash.

It is also noteworthy that the Committee Report has pointed out the need for a National Education Policy to address this issue as the unemployment rate of graduates in university faculties is increasing.

The Committee on Public Accounts chaired by Prof. Tissa Vitarana, Member of Parliament consists of 22 members.