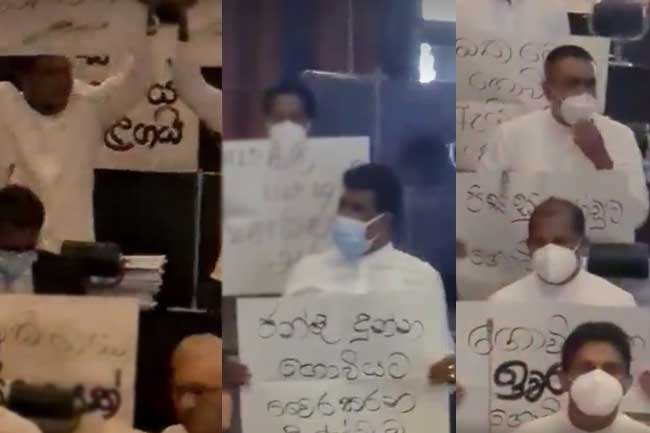 The lawmakers of Samagi Jana Balawegaya (SJB), holding placards, have staged a protest inside the Parliament chambers, demanding immediate solutions for the ongoing fertilizer issue.

Chief Opposition Whip, MP Lakshman Kiriella, addressing the parliament session, pointed out that the national policy framework ‘Vistas of Prosperity and Splendour’ had mentioned a 10-year plan to discard the use of chemical fertilizer in Sri Lanka. However, the government has, against the public’s mandate, has taken measures to ban the import of chemical fertilizer just within a year, he added.

Opposition Leader Sajith Premadasa meanwhile said the government is proving its incapability day by day. Farmers are now afflicted without fertilizer and pesticides, he went on.

Taking to his official Twitter account, MP Harsha de Silva said they staged the protest against the ad-hoc decision of the government to ban chemical fertilizer and subsequent emerging calamity in the country’s agriculture sector.

“Now airlifting chemical nano nitrogen (urea) is too little too late,” he added.