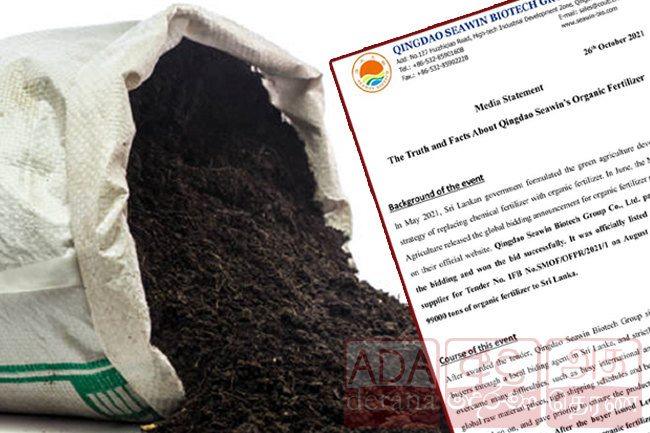 Amidst the row over an allegedly contaminated fertilizer consignment shipped to Sri Lanka, the China-based Qingdao Seawin Biotech Group Co., Ltd. today (October 26) issued a media statement urging that a top third-party testing organization should re-test whether the samples contain the microorganism identified as ‘Erwinia’.

“The supplier strongly requests both parties to entrust the world’s most authoritative and the top third-party testing organization (Swiss SGS group) to re-sampling as soon as possible to test whether the samples are contaminated by Erwinia.”

In her statement, the Director of the Chinese firm, Song Hai Mei, went on the stress that both parties, the supplier and the buyer, should unconditionally accept the test results of the third party.

The Seawin Biotech further stated that the supplier reserves the right to investigate the legal responsibility of relevant parties for the “untrue” or even “slander” reports and comments made by some media which caused damages to the image of the Chinese enterprise and the Chinese government.

In its statement, the Chinese company clarified that the shipping arrangement was requested by Sri Lanka side. Following the awarding of the tender to supply 99,000 tons of organic fertilizer to the island nation, the firm said it signed contracts with the buyers through local bidding agent in Sri Lanka and that it strictly fulfilled the contract. “After the buyer issued Letter of Credit (L/C), Qingdao Seawin Biotech Group shipped the organic fertilizer which comply with the quality requirements on September 23rd according to the time schedule required by L/C (before September 25th).”

The Seawin Biotech pointed out that its product samples have passed the test of Schutter Group – a third-party international testing organization designated by the Sri Lanka Standard Institute – and passed the export plant quarantine of China Customs before shipment on September 23.

Later, on October 05, according to the requirements of Sri Lanka’s National Plant Quarantine Service (NPQS), Testing Centre of China Customs made a supplementary statement on the samples that the products do not contain Erwinia. However, the NPQS and the buyer openly denied the above test results and unilaterally used the test report issued by the NPQS laboratory as the basis for judging the quality of the product which is inconsistent with the contract agreement, international trade rules and the rest result of their own-designated third-party, the Chinese firm alleged.

The company also noted that the detection method and conclusion of NPQ in Sri Lanka do not comply with the international animal and plant quarantine conventions. Upon receiving the samples on September 23, Seawin Biotech says the buyer had sent an oral notice informing that the NPQS had concluded that fertilizer samples are suspected to be contaminated by Erwinia. “But it did not provide the test report, test method and standards.”

The Seawin Biotech explained, “According to ISPM27 rule in IPPC (International Plant Protection Convention), it will take more than 6 days to identify Erwinia, but NPQ only takes 3 days to draw a “suspicious” conclusion. After the supplier raised doubts, NPQ Sri Lanka updated the report on October 11th. 7 days was used to test, but it still did not indicate the test standards and methods. Testing temperature of Erwinia shown in the report is 37 °C, and carrot slices at 37 °C are used for pathogenicity test. According to the relevant agreement of IPPC, the testing temperature of Erwinia is 25 °C, and healthy plants should be used for pathogenicity test. At least 13~14 days should be used to confirm Erwinia through pathogenicity. The unscientific detection method and conclusion of NPQ in Sri Lanka obviously do not comply with international animal and plant quarantine convention.”

The Chinese firm stated that the irresponsible remarks mislead the public and undermine the credibility of the media. The “deliberately creating difficulties”, “unreasonable” and even “malicious” acts of NPQS, the buyer and some media reports gave people reason to suspect that the buyer is creating various obstacles to obstruct the performance of the contract, and even has bad commercial intentions.

In this backdrop, the Ceylon Fertilizer Company today obtained another enjoining order from the Colombo Commercial High Court against the Seawin Biotech, its local agent and the state-run People’s Bank, preventing the payment to the Chinese firm on Letter of Credit.

The CFC first obtained an enjoining order on October 26 against the Chinese firm in question, preventing the People’s Bank from making any payment under a Letter of Credit opened in favour of the Chinese company.

According to the President’s Media Division (PMD), the court has been informed that even though the Chinese Company was required to ship sterile organic fertilizer under the tender contract, it had admitted in its shipping advice that the consignment may contain microorganisms.

The PMD further stated that the NPQS had tested the sample sent to them and had confirmed the presence of organisms, including certain types of harmful bacteria.