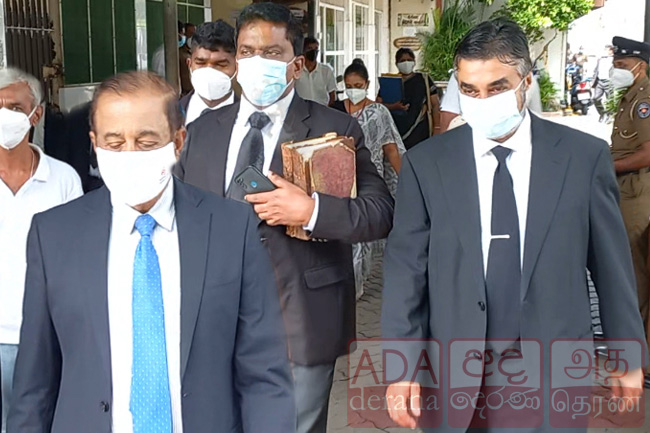 The case against former Defence Secretary Hemasiri Fernando and former IGP Pujith Jayasundara filed with the Colombo Magistrate’s Court on charges of criminal negligence of duty by failing to prevent the Easter Sunday terror attacks despite receiving intelligence information in advance have been concluded.

It was taken up before Colombo Acting Magistrate Sanjaya Gamage today (October 27).

During the judicial proceedings, the Criminal Investigation Department informed that the court that another lawsuit against the two defendants is currently being heard before a special trial-at-bar at the Colombo High Court.

Accordingly, the investigation officers sought the conclusion of the lawsuit filed with the magistrate’s court.

Accepting the request, the acting magistrate ordered to end the relevant proceedings against the former defence secretary and the former IGP.

In July this year, the Chief Justice appointed a special trial-at-bar at the Colombo High Court to hear the case against Hemasiri Fernando and Pujith Jayasundera on the negligence of duties and failure to prevent the Easter Sunday attacks.

The Attorney General in May exhibited information in the Colombo High Court consisting of 800 charges against Jayasundara and Fernando, in respect of those killed and injured in the Easter Sunday attacks.

They have been charged in two separate trials-at-bar for the offences of murder, attempted murder for their serious lapses and grave omissions to prevent the Easter Sunday bombings.

The former IGP and former defence secretary have been accused of neglecting the prior intelligence input on the impending attacks, thereby failing to prevent the loss of life.

Nine suicide bombers, belonging to local Islamist extremist group National Thawheed Jamaat (NTJ) linked to ISIS, carried out coordinated blasts that tore through three churches and as many luxury hotels in Sri Lanka on the Easter Sunday in 2019.

A special presidential panel recently recommended that criminal action be taken against both Fernando, Jayasundera and several other senior defense officials.