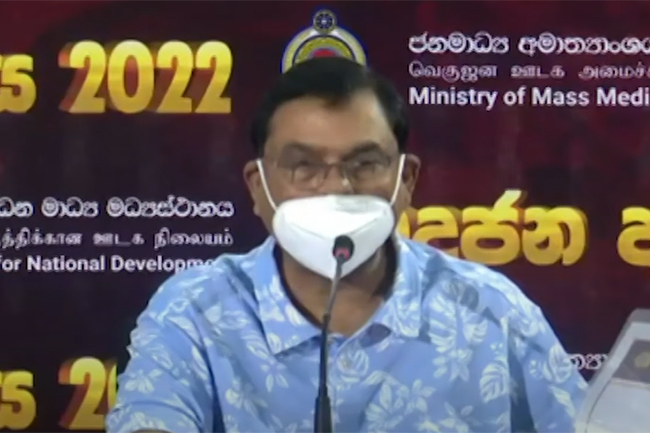 Sri Lanka would not be defaulting on its debt repayment, Minister of Finance Basil Rajapaksa told reporters on Saturday (Nov, 13), addressing a special media briefing convened by the Finance Ministry.

During the press conference, he addressed an array of questions on the budget proposals tabled in Parliament the day before.

With regard to the country’s foreign reserves crisis and debt servicing, the lawmaker said various solutions including the halt of vehicle imports but these have failed to yield a clear solution.

“We think that this issue will persist next year as well, but we expect to resolve this issue without obtaining loans.”

Sri Lanka has to pay USD 500 million in debt in January and USD 1 billion in July next year, according to the finance minister who assured that the island nation would definitely meet both payments.

“By 2027, the country expects to have foreign reserves of USD 10 billion of the country’s own money. From next year, we expect to contribute USD 1 billion of our own money annually towards forex reserves. So, for the first time by 2024, we will be able to take the external budget into positive territory after many years.”

Further, the finance minister said the state sector service has become bloated to the point that the country cannot sustain it anymore.

“I think we don’t need to appease them [public servants] with sweets any further,” the finance minister said adding that the government is not in a position to allocate more public funds for the state service for another year.

One of the chief accusations levelled by the Opposition is the lack of price reduction of goods via Budget 2022, which was tabled in parliament on Friday.

In response, the finance minister said, “There are no short-term solutions. This government and other governments in the world got into difficulty by attempting to do so.”

The only solution is to increase the production, he added. “Amid the existing COVID pandemic, I don’t think the price imported goods will come down within the next year.”

Minister Rajapaksa stated that the government is doing everything it can to ensure that. “As the finance minister, I say that the tax from the tourism sector goes to the tourist board and not to the government. The government gets income tax from all other sectors, but they independently collect the revenue and spent it.”