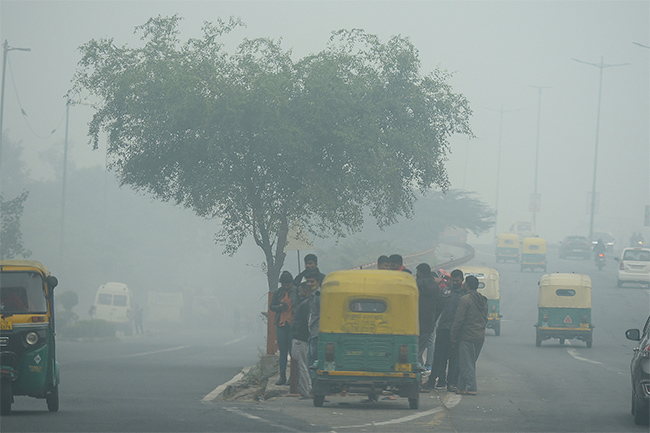 Authorities in the Indian capital, Delhi, have shut all schools and colleges indefinitely amid the worsening levels of air pollution.

Construction work has also been banned until 21 November but an exception has been made for transport and defence-related projects.

Only five of the 11 coal-based power plants in the city have been allowed to operate.

A toxic haze has smothered Delhi since the festival of Diwali.

The levels of PM2.5 - tiny particles that can clog people’s lungs - in Delhi are far higher than the World Health Organization’s (WHO) safety guidelines. Several parts of the city recorded figures close to or higher than 400 on Tuesday, which is categorised as “severe”.

A figure between zero and 50 is considered “good”, and between 51 and 100 is “satisfactory”, according to the the air quality index or AQI.

Some schools had already shut last week because of pollution and the Delhi government said it was mulling over a lockdown to improve air quality as dense clouds of smog engulfed the city.

A mix of factors like vehicular and industrial emissions, dust and weather patterns make Delhi the world’s most polluted capital. The air turns especially toxic in winter months as farmers in neighbouring states burn crop stubble. And fireworks during the festival of Diwali, which happens at the same time, only worsen the air quality. Low wind speed also plays a part as it traps the pollutants in the lower atmosphere.

This year, the pollution has become so dire that it prompted a stern warning from India’s Supreme Court, which directed state and federal governments to take “imminent and emergency” measures to tackle the problem.

Following the hearing, a meeting was called by Delhi’s Commission for Air Quality Management and emergency measures were announced.

Other measures announced by the panel include a ban on the entry of trucks in Delhi and the neighbouring states of Uttar Pradesh, Punjab, Haryana and Rajasthan until 21 November, except those carrying essential commodities.

The panel also directed Delhi and other states to “encourage’’ private offices to allow 50% of their employees to work from home during the period to cut down vehicle emissions and dust levels.

India’s pollution problem is not just limited to Delhi.

Indian cities routinely dominate global pollution rankings and bad air kills more than a million people every year, a report by US research group, the Energy Policy Institute at the University of Chicago (EPIC), said. It added that north India breathes “pollution levels that are 10 times worse than those found anywhere else in the world” and, over time, these high levels have expanded to cover other parts of the country as well.