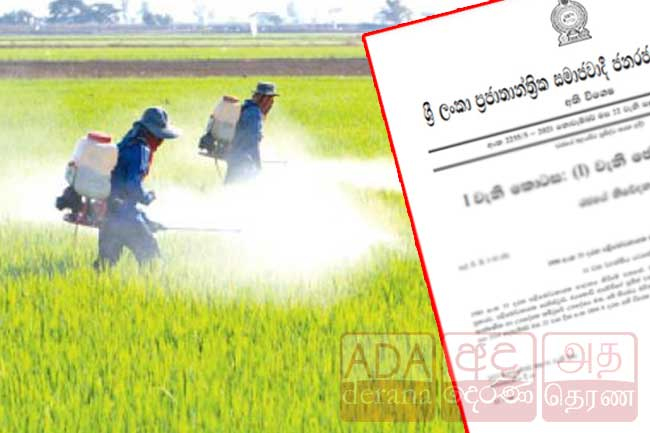 Registrar of Pesticides removed from post with immediate effect

Registrar of Pesticides J.A. Sumith, who came under the spotlight over the gazette notification issued to lift the ban on Glyphosate and several other agrochemicals, has been removed from his post with immediate effect.

In a communiqué issued today, the Media Secretary of the Agriculture Minister, Jayasuriya Udukumbura stated that the ban on five agrochemicals is still in effect.

Agriculture Minister Mahindananda Aluthgamage has stated that a disciplinary inquiry would be conducted against the Registrar of Pesticides. He has also given directives to revoke the gazette notification dated November 01, 2021.

The Registrar of Pesticides yesterday (November 22), issued an Extraordinary Gazette, rescinding the gazette notification issued in 2014 to prohibit the use and sale of Glyphosate and four other agrochemicals in several areas.

Issued by the Registrar of Pesticides Dr. J. A. Sumith, it revoked the Order made under Section 11 of the Control of Pesticides Act, No. 33 of 1980 and published in Gazette Extraordinary No. 1894/4 of December 22, 2014, “in the interest of the public and on the advice of the Pesticide Technical and Advisory Committee.”

Later, Minister Aluthgamage instructed the Secretary to the Agriculture Ministry to call for an explanation from the Registrar of Pesticides regarding the gazette issued to revoke a previous gazette notification.

The Gazette issued in 2014 had prohibited the use, offer for sale or sale of agrochemicals containing the active ingredients Glyphosate, Propanil, Carbaryl, Cholopyrifos and Carbofuran in the following areas: within the Districts of Anuradhapura, Polonnaruwa, Kurunegala, Monaragala and within the Divisional Secretariat, Divisions of Mahiyanganaya, Rideemaliyadda, Kandaketiya in the Badulla District.