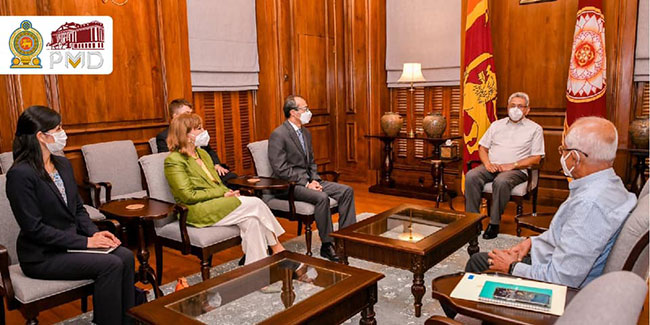 The United Nations will always work closely with Sri Lanka, said Mr. Khaled Khiari, UN Assistant Secretary-General (ASG) for the Middle East, Asia and the Pacific from the Department of Political and Peacebuilding Affairs - Department of Peace Operations Khaled Khiari.

Mr. Khiari made these remarks when he met with President Gotabaya Rajapaksa at the Presidential Secretariat, today (25).

UN Assistant Secretary General Khiari is visiting Sri Lanka as a follow-up to the bilateral meeting with the President and the UN Secretary- General Antonio Guterres held in September this year on the sidelines of the 76th Session of the UN General Assembly.

Mr. Khiari conveyed the best wishes of UN Secretary-General Guterres to President Rajapaksa and said that the United Nations is willing to engage in a constructive and positive engagement with Sri Lanka.

Expressing satisfaction over the President’s affection and interest in the environment, the Assistant Secretary General appreciated Sri Lanka’s commitment to achieving the Millennium Development Goals, the PMD reported.

President Rajapaksa expressed gratitude to the UN agencies and donors that have assisted Sri Lanka through the COVAX facility to make the vaccination drive successful and in facing other challenges in the face of the COVID-19 epidemic.

The President pointed out that the government’s development programme implemented in the North and East after the end of the war in 2009 had brought about rapid development. The President recalled his invitation made while participating in the UN General Assembly to the diaspora to work together with all communities after visiting Sri Lanka. The President said that he hoped that the invitation would be met with positive initiatives.

The two sides exchanged views on unity and relations between communities. An environment where all communities can live freely has been made available in Sri Lanka. The President pointed out that the Minister of Justice is from the Muslim community, the Attorney General is from the Tamil community and many of those holding other key posts are of different communities.

President Rajapaksa said the government has undertaken a great task in building unity among the communities and therefore, no one should have any doubt in this regard.

Both sides were of the view that education was fundamental to unity among the communities.
President Rajapaksa said that the process by which South Africa has been able to end apartheid and move forward will be studied and the lessons that can be learned from it and what can be implemented will be looked into.

The President also expressed hope that the United Nations will provide assistance in this regard.