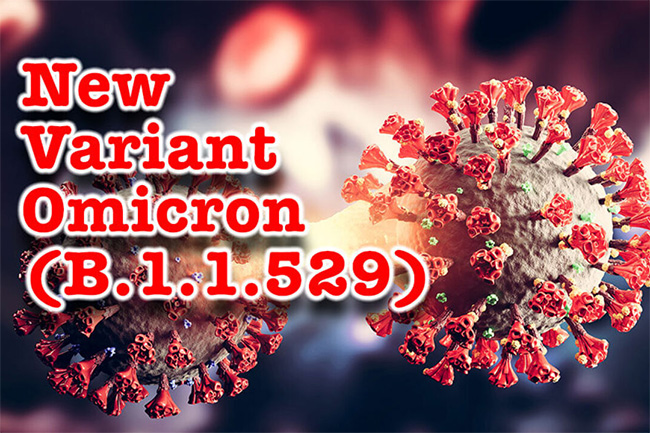 The World Health Organization (WHO) has declared a new coronavirus variant to be “of concern” and named it Omicron.

It had a large number of mutations, and early evidence suggested an increased reinfection risk, the WHO said.

It was first reported to the WHO from South Africa on 24 November, and has also been identified in Botswana, Belgium, Hong Kong and Israel.

A number of countries have now decided to ban or restrict travel to and from southern Africa.

Travellers from South Africa, Namibia, Zimbabwe, Botswana, Lesotho and Eswatini will not be able to enter the UK unless they are UK or Irish nationals, or UK residents.

US officials said flights from South Africa, Botswana, Zimbabwe, Namibia, Lesotho, Eswatini, Mozambique and Malawi would be blocked, mirroring earlier moves taken by the EU. It will come into effect on Monday.

It is not uncommon for a virus to change, or mutate, over time. A variant becomes a variant of concern when that mutation might affect things like transmissibility, virulence or the effectiveness of vaccines.

‘Bad news - but not doomsday’

On Friday, the WHO said the number of cases of this variant, initially named B.1.1.529, appeared to be increasing in almost all of South Africa’s provinces.

“This variant has a large number of mutations, some of which are concerning,” the UN public health body said in a statement.

It said “the first known confirmed B.1.1.529 infection was from a specimen collected on 9 November”.

The WHO said it would take a few weeks to understand the impact of the new variant, as scientists worked to determine how transmissible it was.

A top UK health official warned that vaccines would “almost certainly” be less effective against the new variant.

But Professor James Naismith, a structural biologist from the University of Oxford, added: “It is bad news but it’s not doomsday.”

He said mutations in the variant suggested it may spread more quickly - but transmissibility “is not just as simple as ‘this amino acid does this’“ and was determined by how mutations worked together.

If the variant were to spread more quickly, it would inevitably reach the UK, Prof Naismith said.

Meanwhile, US infectious disease chief Dr Anthony Fauci said that while the reports on the new variant threw up a “red flag”, it was possible that vaccines might still work to prevent serious illness.

“Until it’s properly tested... we don’t know whether or not it evades the antibodies that protect you against the virus”, Dr Fauci told CNN.

The WHO has warned against countries hastily imposing travel restrictions, saying they should look to a “risk-based and scientific approach”.

However, in addition to the UK, and the US, EU countries and Switzerland have temporarily halted flights to and from some southern African countries.

“It is now important that all of us in Europe act very swiftly, decisively and united,” European Commission chief Ursula von der Leyen said.

European Commission spokesperson Erik Mamer said health chiefs from all 27 EU states agreed to impose restrictions at an emergency meeting following the discovery of the first European case of the variant in Belgium.

Japan has announced that from Saturday, travellers from much of southern Africa will need to quarantine for 10 days and take a total of four tests during that time.

And Iran will ban travellers from six southern African countries, including South Africa. Iranians arriving from the region will be admitted after testing negative twice, state TV says.

“The reaction of some of the countries, in terms of imposing travel bans, and such measures, are completely against the norms and standards as guided by the World Health Organization,” he said.

Echoing his words, Angelique Coetzee, chairperson of the South African Medical Association, told the BBC that the travel restrictions on her country were premature.

Stock markets across the world also fell sharply on Friday, reflecting the fears of investors over the potential economic impact.

The FTSE 100 index of leading UK shares closed 3.7% down, while main markets in Germany, France and the US also sank.