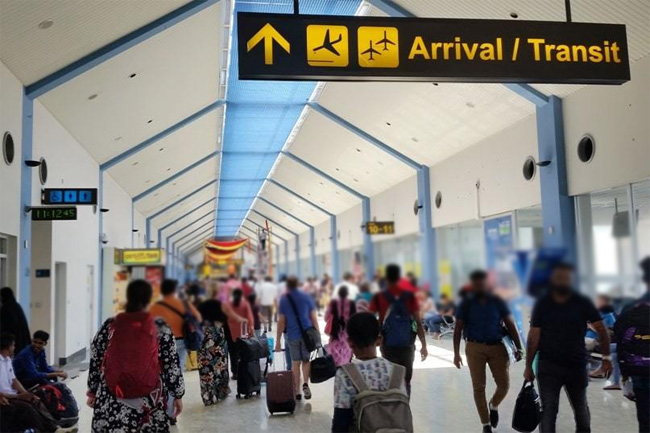 As the newly-detected highly mutated Covid-19 variant of concern ‘Omicron’ sparked serious global worry, Sri Lanka has decided to ban the arrival of foreign travellers who have been to six countries in the African continent.

Accordingly, passengers with a travel history – including transit – to South Africa, Namibia, Zimbabwe, Botswana, Lesotho and Eswatini (Swaziland) within the past 14 days will not be allowed entry to the island nation with effect from midnight on 28 November.

In a communiqué, the Director-General of Health Services noted that irrespective of the COVID vaccination status, the travelers aged 12 years and above, who arrived in Sri Lanka on 26 and 27 November from the aforementioned countries, would be referred to a PRC test upon arrival.

If the PCR test turns out to be negative for the virus, the travelers will have to undergo mandatory quarantine.

All travelers of 12 years and above will subsequently be referred to a PCR or rapid antigen testing on Day 14 and released from quarantine with a negative test report.

The new variant was first reported to the World Health Organization (WHO) from South Africa on 24 November. It has also been identified in Botswana, Belgium, Hong Kong and Israel.

It was revealed that the virus strain, first called B.1.1.529, carries an unusually high number of mutations. Researchers said the Omicron variant has about 50 mutations, more than 30 of which are on the spike protein.

With increasing concerns across the world over the new COVID variant of concern, the United Kingdom was the first to impose a travel ban on six countries in southern Africa.

Later, the United States, EU countries and Switzerland also temporarily halted flights to and from some southern African countries.

Japan announced that travellers from much of southern Africa will need to quarantine for 10 days starting from Saturday and take a total of four COVID tests during that time.

India has ordered more rigorous screening and testing for travellers arriving from South Africa, Botswana and Hong Kong, according to local media.