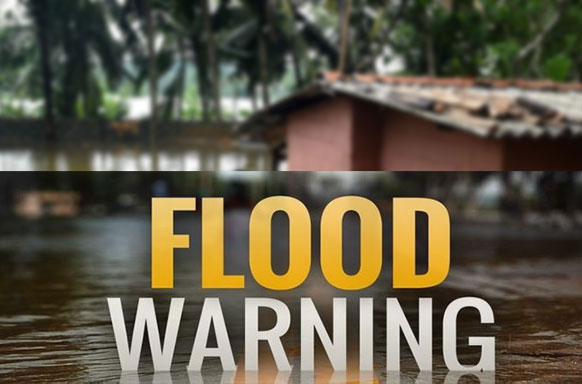 Owing to the rainfall situation occurred in Maha Oya River Basin within last 24 hours, the river water levels at the upstream areas have been rising considerably, it said.

Therefore, there is a considerable probability of a Minor Flood occurring in low-lying areas in the river basin especially in Marandagolla, Nalla, Diwuldeniya and Welihinda villages in Giriulla DS division areas within next few hours.

There is also a threat of the Negombo-Kurunegala road inundating close to Giriulla town.

In addition, there is a possibility of a Minor Flood situation occurring in low-lying areas of the Maha Oya River Basin situated in Alawwa, Mirigama, Pannala, Wennappuwa, Negombo, Katana and Dankotuwa DS divisions.

The public living these areas and motorists traveling through these areas are requested to be highly vigilant in these regards.

Meanwhile the Irrigation Department said that as per the rainfall and river water levels observed in upstream areas of the Deduru Oya Basin, there is a possibility of Minor Floods occurring depending on the upcoming rainfall, the spilling discharge may have to be increased.

By analyzing this situation there is a possibility of a considerable flood situation occurring in low-lying areas of Deduru Oya valley situated in Wariyapola, Nikaweratiya, Mahawa, Kobeigane, Bingiriya, Pallama, Chilaw, Arachchikattuwa and Rasnayakapura D/S Divisions within next few hours up to 24 hours.

The department requested the residents in those areas and motorists traveling through those areas to pay extra attention in this regards.

Disaster management authorities are requested to take suitable actions in these regards, the alert said.

The level 3 warning (Colour Code Red), advises people living in the aforementioned at-risk areas to evacuate to a safe location if the rains continue to avoid the risk of landslides, slope failures, rock falls, cutting failures and ground subsidence, since the rainfall within the past 24 hours has exceeded 150 mm.