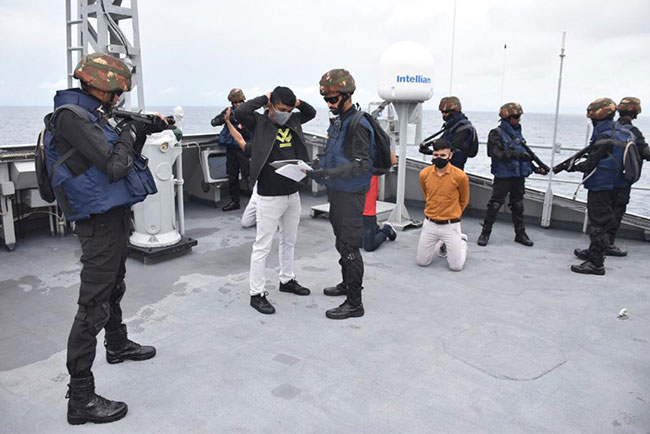 A two-day trilateral maritime drill conducted by the coast guards of India, Sri Lanka and the Maldives to bolster security in the Indian Ocean, enhance mutual operational capability and exercise interoperability between these three countries culminated in the Maldives on Sunday.

The 15th edition of the trilateral engagement termed “Dosti” is conducted biennially, and 2021 marks 30 years since these maritime drills were first introduced, the Indian High Commission said.

However, it began primarily as a bilateral engagement, involving only Indian and Maldives Coast Guards. Sri Lanka joined in 2012 to make it a trilateral exercise.

“The two-day exercise under the aegis of Colombo Security Conclave (CSC) is a pioneering effort to collaborate efforts towards the Pillar of Maritime Security”, the Indian High Commission in Colombo said in a statement.

The CSC Focused Operations are aimed at streamlining Standard Operating Procedures (SOPs) and enhanced interoperability amongst the three navies.

The two-day operation had a platform for coordinated maritime surveillance in the respective Exclusive Economic Zones for counter narcotics, search and rescue at sea, air tracking and establishing effective communication.

“The aim of India-Maldives-Sri Lanka tri-lateral exercise ‘Dosti’’ is to further fortify the friendship, enhance mutual operational capability, and exercise interoperability and to build cooperation between the Coast Guards of Maldives, India and Sri Lanka,” the Indian High Commission in the Maldives said.