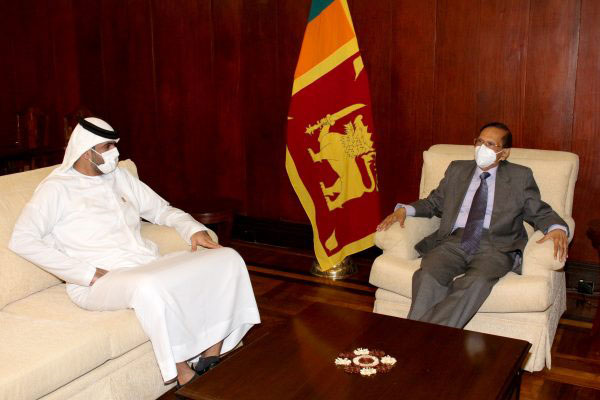 During a meeting with Foreign Minister Prof. G.L. Peiris, Chargé d’affaires of the United Arab Emirates to Sri Lanka Ibrahim Ali Ibrahim Al Gergawi has expressed the UAE government’s willingness to enhance bilateral trade and economic relations with the government of Sri Lanka.

Responding to the remarks made by the Chargé d’affaires, Foreign Minister Peiris expressed that the Government of Sri Lanka and the UAE has witnessed extremely cordial relations, and during his tenure he is looking forward to further strengthening Sri Lanka’s relations with the UAE.

Minister Peiris also noted with appreciation, the support extended by the United Arab Emirates to Sri Lanka in the regional and multilateral fora.

Foreign Minister G.L. Peiris emphasized the importance of cooperation among the member countries of the Indian Ocean Rim Association (IORA), where Sri Lanka took over as the Vice-Chair during the 21st Council of Ministers Meeting held at Dhaka, Bangladesh, and commended the role played by UAE as former Vice-Chair for the progress of the Association.

He also stated that he is looking forward to further discussing and deliberating on these issues during his participation at the 5th Indian Ocean Conference – IOC scheduled to be held in December 2021 in Abu Dhabi, UAE which will be Chaired by the President of Sri Lanka Gotabaya Rajapaksa under the theme “Ecology, Economy, and Epidemic”.