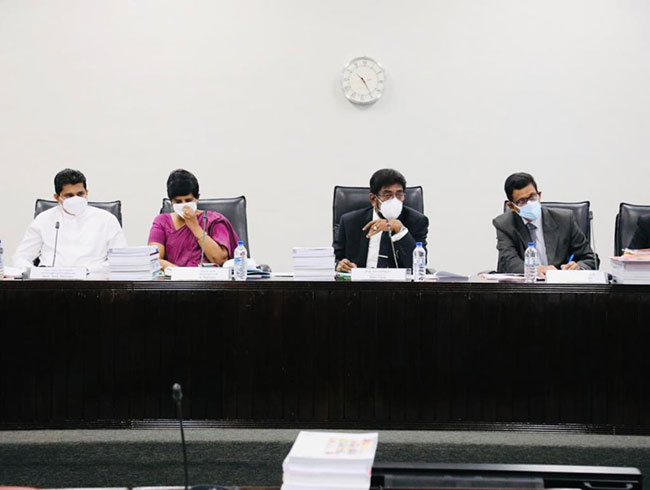 Minister of Health, Keheliya Rambukwella has requested the Secretary to the Ministry to conduct a prompt investigation and submit an evaluation report on the distribution of medical equipment and human resources to government hospitals.

Although the Government taking over the Base Hospital Center will improve the quality of health care, the taking of subjects under the Provincial Councils by the Central Government is problematic as it conflicts with the process of decentralization of power under the 13th Amendment to the Constitution, the Minister further stated addressing the Consultative Committee.

Minister of Health, Keheliya Rambukwella further stated that it is appropriate to investigate and submit a report to the Cabinet on this regard.

Member of Parliament Dr. Upul Galappaththi pointed out the need to follow a common policy in increasing salaries as there has been a wave of strikes in the health sector from time to time in the recent past.

The State Minister further stated that a national information system on drugs will be launched and all hospitals in the country will be connected to it.

Parliamentarian Geetha Kumarasinghe said that there are many shortcomings in the Elpitiya Base Hospital and action should be taken to address those shortcomings.

Although the Polonnaruwa Kidney Hospital was built and opened, the Committee also paid special attention to the fact that it has not yet started to function properly.

Parliamentarian Madhura Withanage also raised an issue regarding the non-inclusion of the information of certain persons who had been vaccinated against COVID in the active database.

The Secretary to the Ministry of Health informed the Committee that steps will be taken to resolve this situation expeditiously.

The number of calls received by the 1990 ‘Suwa Sariya’ Ambulance Service as of midnight yesterday was forty-six million thirty-three thousand, said MP Dr. Harsha de Silva. He pointed out that Rs. 1,800 million has been allocated for this service for the year 2022, which is not enough.

The Minister of Health informed the Committee that discussions are underway with the relevant parties to increase the amount by at least another Rs. 1,200 million as requested by Dr. Harsha de Silva.

It was also revealed at the meeting that 719 Ayurvedic graduates are unemployed. State Minister Sisira Jayakody stated that there is a plan to open Ayurvedic dispensaries locally and give them appointments.

More than 20 Ministers, State Ministers and Members of Parliament were present at this Committee. A number of officials from the health sector also joined the occasion, the statement said.