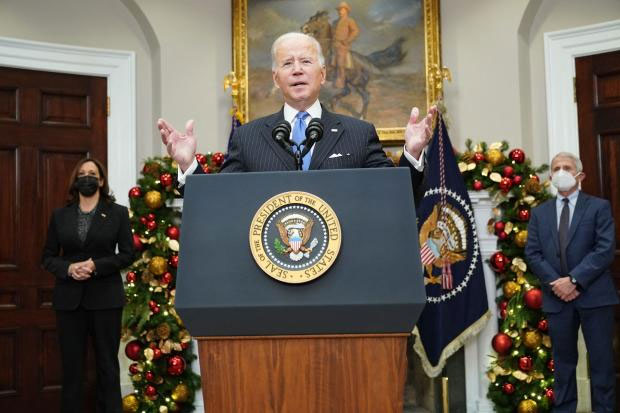 (Reuters) – US President Joe Biden sought to reassure Americans on Monday that the United States was prepared to handle the new COVID-19 Omicron variant, pledging to accelerate development of vaccines to handle it if necessary.

“This variant is a cause for concern, not a cause for panic,” Biden said in remarks at the White House following a meeting with his COVID-19 team.

“Sooner or later we are going to see cases of this new variant here in the United States,” Biden said. The White House is working with vaccine makers Pfizer, Moderna and Johnson & Johnson to develop contingency plans, if needed, to handle Omicron, he said.

A U.S. ban took effect earlier on Monday that blocked most travelers from eight southern African nations from entering the country in an effort to slow transmission and give experts more time to assess Omicron, including its severity, transmissibility and impact on vaccines.

Biden said the travel restrictions were put in place to give the country time to get more people vaccinated. Vaccine hesitancy in the United States and around the world has thwarted public health officials’ efforts to get the pandemic under control.

Urging Americans to mask up, Biden said: “Please wear your mask when you’re indoors, in public settings around other people.”

Asked if other curbs were imminent, Fauci told ABC News’ “Good Morning America” program: “I don’t think so at all.”

Much of the United States shut down in early 2020 at the beginning of the pandemic, and other measures such as face masks and vaccine mandates have become politically contentious even as health experts tout their effectiveness.

The World Health Organization (WHO) said on Monday the Omicron coronavirus variant carried a very high risk of infection surges as more countries closed borders, casting a shadow over economic recovery from the two-year pandemic.

Big airlines acted swiftly to protect their hubs by curbing passenger travel from southern Africa, fearing that a spread of the new variant would trigger restrictions from other destinations beyond the immediately affected regions, industry sources said.

The WHO advised its 194 member nations that any surge in infections could have severe consequences, but said no deaths had yet been linked to the new variant.

“Omicron has an unprecedented number of spike mutations, some of which are concerning for their potential impact on the trajectory of the pandemic,” the WHO said.

“The overall global risk related to the new variant of concern Omicron is assessed as very high.”

Further research was needed to understand Omicron’s potential to escape protection against immunity induced by vaccines and previous infections, it added.

An infectious disease expert from South Africa, where scientists first identified Omicron, said it was too early to say whether symptoms were more severe than previous variants, but it did appear to be more transmissible.

South African cases were likely to exceed 10,000 a day this week, rocketing up from barely 300 a day two weeks ago, Karim added.

But South African President Cyril Ramaphosa denounced “unjustified and unscientific” travel bans that damage tourism-reliant economies. His country has said it is being punished for its scientific ability to detect new variants.

Health ministers from the Group of Seven bloc of wealthy nations praised South Africa for its “exemplary work” in detecting the variant and alerting others, a sentiment echoed by Biden.