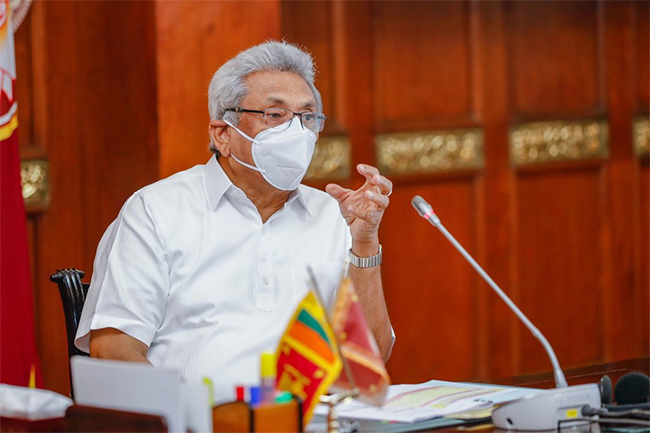 “This act of barbarism is a great shock to the Sri Lankans as well as to all those across the world who value humanity,” the Head of State said in a statement issued today (December 04).

He appealed to Prime Minister Imran Khan to ensure the safety of the other Sri Lankans living in Pakistan.

President Rajapaksa said he is deeply saddened by the merciless lynching of the Sri Lankan professional who worked as a manager of a factory in Sialkot, one of Pakistan’s most industrialized regions.

“As an ardent friend of Pakistan, Sri Lanka commends the actions taken by the Government of Pakistan led by Prime Minister Imran Khan to ensure justice, immediately after this brutal assassination,” the statement read further.

President Rajapaksa noted that the Sri Lankan government and the people of Sri Lanka look forward with great confidence on the future steps that would be taken by the Pakistani government on the matter.

“I also urge the Government of Pakistan to ensure the safety of all other Sri Lankans living in Pakistan.”

He said the Foreign Ministry and the Sri Lankan High Commission in Pakistan are currently taking action based on the instructions given by him and Prime Minister Mahinda Rajapaksa, on the immediate course of action to be taken upon receiving reports of the incident.

President’s statement added: “Extremist activities of any nature create grave chaos in a society. Therefore, such incidents further confirm that the world must act with the same objective when taking action against extremism. I wish to remind that I, the Government and the Sri Lankan people are with Mr.  Priyantha Kumara’s family members, who are deeply saddened and shocked by this unfortunate incident.”

Deeply concerned by the incident in Sialkot #Pakistan. #SriLanka trusts that PM @ImranKhanPTI and the Gvt. of Pakistan will ensure justice is served and ensure the safety of the remaining Sri Lankan workers in Pakistan.

Meanwhile, PM Mahinda Rajapaksa said it is shocking to see the brutal and fatal attack on Priyantha Diyawadana by extremist mobs in Pakistan.

“My heart goes out to his wife and family. Sri Lanka and her people are confident that PM Imran Khan will keep to his commitment to bring all those involved to justice.”

The gruesome lynching of the Sri Lankan national took place on Wazirabad Road in Sialkot, where it was reported that a group of workers of private factories tortured the victim to death and burnt his remains.

The deceased was later identified as Priyantha Kumara, who worked as a manager of a factory of the industrial engineering company.

Gruesome video clips shared on social media showed hundreds of people gathered in the streets of Sialkot, one of Pakistan’s most industrialized regions and an angry mob brutally trashing the factory manager while jeering religious slogans.

The Sri Lankan manager was murdered for allegedly tearing down a religious poster of the ultra-radical Islamist party Tehreek-e-Labbaik Pakistan (TLP) in which Quranic verses were inscribed.

Later on Friday, Pakistani Prime Minister Imran Khan said in a tweet, “The horrific vigilante attack on factory in Sialkot & the burning alive of Sri Lankan manager is a day of shame for Pakistan. I am overseeing the investigations & let there be no mistake all those responsible will be punished with full severity of the law. Arrests are in progress.”